As the US awaits election day on November 3, misleading claims from President Donald Trump and his opponent Joe Biden are circulating on hot-button issues from the Covid-19 pandemic to the economy, healthcare and housing. 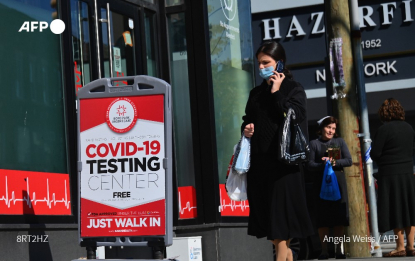 A person walks past a COVID-19 Testing Center in the Borough Park section of Brooklyn, New York City, on October 9, 2020 (AFP / ANGELA WEISS)

Former vice president and Democratic candidate Joe Biden and his campaign team claimed in an ad that Trump called the novel coronavirus a “hoax.”

The video, posted on Twitter on September 15, 2020, shows a clip of Trump at a rally at the beginning of the pandemic at which he says “the coronavirus...and this is their new hoax.”

It then contrasts that with a recording in which the president privately called the virus a “killer.”

However, the video from a rally in North Charleston, South Carolina on February 28, 2020, was misleadingly edited.

“Now the Democrats are politicizing the coronavirus,” Trump said, before praising his government’s handling of the pandemic.

He goes on to compare Democratic criticism of his response to the pandemic as “their new hoax.”

“One of my people came up to me and said, ‘Mr President, they tried to beat you on Russia, Russia, Russia.’ That didn't work out too well. They couldn’t do it. They tried the impeachment hoax,” he said. “They tried anything, they tried it over and over... And this is their new hoax."

Several TV channels, including NBC and MSNBC, aired the cut version of the speech.

Trump and his entourage have repeatedly claimed at rallies, town halls and during interviews that his government’s response to the novel coronavirus pandemic had “saved over two million lives.”

The president’s claim relates to a March 2020 paper from Imperial College London that explored how the virus could spread under different response levels.

The paper, “Impact of non-pharmaceutical interventions to reduce COVID-19 mortality and healthcare demand,” suggested that “in the (unlikely) absence of any control measures or spontaneous changes in individual behaviour,” deaths could peak at 2.2 million in the United States.

Trump’s pandemic response did not save two million people who were expected to die; it rather avoided an unlikely worst-case scenario. 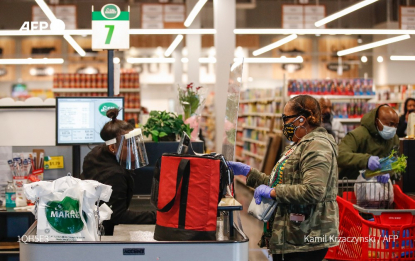 A customer pays for her groceries at the Local Market Foods store in Chicago, Illinois, on April 8, 2020 (AFP / KAMIL KRZACZYNSKI)

“We’ve created a record 11.4 million American jobs since May,” Trump boasted during a speech to the New York Economic Club on October 14, 2020. The president often mentions this figure, referring to the statistical bounce that followed the reopening of the US economy after late winter lockdowns.

However, he does not always provide the proper context for the number.

The statement fails to point out that 22 million jobs had previously been lost as local governments across the country imposed lockdowns to combat the spread of the coronavirus.

Many people who had lost their jobs due to business closures went back to work, as opposed to new jobs being created. More recently, job recovery slowed down in September, dropping to 661,000 new jobs from 1.5 million in August and 1.8 million in July.

Biden claimed in several speeches in October that Trump pledged to eliminate the tax that finances Social Security, while a campaign ad claims that “Social Security benefits will run out in just three years” under Trump’s plan.

The claim plays on the ambiguities of Trump's plans for Social Security, which provides millions of Americans with pension benefits.

Trump’s administration announced on August 8, 2020 that, in certain cases, payroll taxes would be deferred between September and December this year, to assist US businesses during the pandemic.

Payroll tax is a 12.4 percent levy on income up to $137,700 split between employers and employees, and funds 90 percent of Social Security. The memorandum includes a clause to “explore avenues” to “eliminate the obligation” to pay the deferred taxes.

Trump later said his administration would be “terminating the payroll tax,” only for White House Press Secretary Kayleigh McEnany to specify the next day that “he wants permanent forgiveness of the deferral.”

Those who did not pay during the deferral period would not have to pay back taxes, but the tax would resume as before past that point.

On August 12, 2020, Trump provided his most detailed plan for Social Security during a press conference. He suggested paying for the deferred payroll taxes with separate money from the general fund, generally used to finance the government’s daily and long-term operations.

“When I win the election, I’m going to go completely and totally forgive all deferred payroll taxes without in any way, shape or form hurting Social Security. That money is going to come from the general fund. We’re not going to touch social security,” he said. 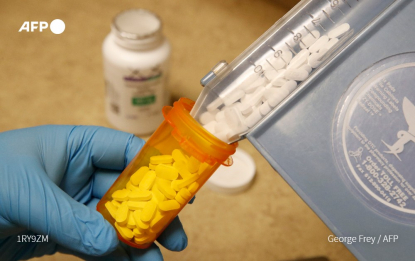 “They have 180 million people, families under what he wants to do, which will basically be socialized medicine -- you won’t even have a choice -- they want to terminate 180 million plans,” Trump said during the final presidential debate on October 22, 2020. He repeated the comments in an interview on CBS’s “60 minutes.”

The number refers to the 180 million Americans covered by private insurance from their employers or purchased for themselves, according to 2019 American Community Survey figures aggregated by health policy organization KFF.

However, Biden’s plan is to build on the existing Affordable Care Act “instead of starting from scratch and getting rid of private insurance.” He wants to create a new public option for coverage like Medicare, to lower costs associated with healthcare, while keeping private options currently in place available.

Joe Biden has warned at several rallies that President Trump’s efforts to do away with the Affordable Care Act, also known as Obamacare, “will take protections away from pre-existing conditions for over a hundred million people.”

Obamacare provides protections for patients with pre-existing conditions, such as high blood pressure or asthma, and makes it illegal for insurers to deny them coverage.

A 2017 report from the Department of Health estimated that up to 133 million people fell into that category. A report from health consulting firm Avalere found that 102 million individuals have a pre-existing condition and are not on Medicare or Medicaid, whose coverage would be jeopardized if the Affordable Care Act was scrapped.

However, individuals with pre-existing conditions whose health insurance is covered by their employers already have some protections under the Health Insurance Portability and Accountability Act of 1996.

In 2019, 55.4 percent of Americans were covered under their employer’s insurance, according to the Census American Community Survey, while 5.9 percent purchased private health care, according to KFF.

Without the Affordable Care Act, those with pre-existing conditions who are part of the 5.9 percent of Americans with private insurance could be denied coverage or charged more. However, those covered by their employers would still benefit from the 1996 protections. 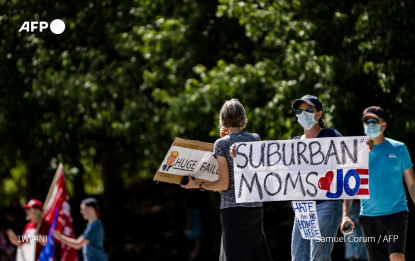 A woman holds up a “Suburban Moms Love Joe” sign across the street from supporters of US President Donald Trump outside of his golf club, Trump National, on August 30, 2020 in Sterling, Virginia (AFP / SAMUEL CORUM )

“They eliminated funding for community policing,” Biden stated at an ABC Town Hall on October 13, in reference to cuts to the Community Oriented Policing Services (COPS) program under Trump.

While the program’s budget decreased from a peak of $1.6 billion in 1998 to a low of $199 million in 2012, it has gradually increased to $304 million in 2019 under Trump, according to a study by the Congressional Research Service.

“Democrats want to abolish the suburbs,” Fox News anchor Tucker Carlson claimed in a segment picked up in a Trump campaign ad.

He said Democrats wanted to abolish “zoning for single-family housing” while “low-income federally subsidized apartments will go up in the suburbs.” The president has reiterated these claims in interviews.

The claims refer to a 2015 regulation strengthening the 1968 Fair Housing Act.

The rule forced 1,200 jurisdictions receiving federal development grants and housing aid to combat segregation and discrimination. Trump suspended the 2015 regulation in 2018, while Biden promises to reinstate it.

Neither the 1968 Act nor the 2015 regulation ban single-family housing, and Biden’s housing plan does not explicitly mention suburbs, according to a keyword search of his campaign website.