A video has been viewed tens of thousand of times on social media alongside a claim in several languages that it shows large numbers of votes for incumbent US President Donald Trump being thrown away from trucks. The claim is false; the video has circulated since 2016 in reports about spoiled chicken being discarded in Saudi Arabia.

The video was published here on Twitter on November 4, 2020.

The Chinese-language caption translates to English in part as:  “The 10 huge trucks of Trump votes are buried in a deep pit.” 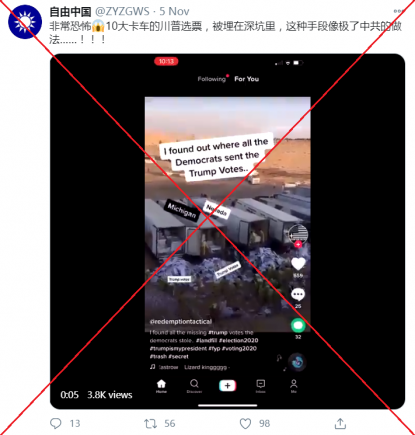 The allegation comes after a series of calls by US incumbent Donald Trump to stop counting votes and still unproven allegations of election fraud. In the past, Trump has repeatedly doubted the legitimacy of postal votes. Former vice president and Democratic challenger Joe Biden won the election on November 7, as AFP reported here.

On Twitter and Facebook, the same video was shared with a similar claim in Chinese, French, Italian, Portuguese, Japanese and German.

A reverse image search using video keyframes found this Hindi-language news article published on October 30, 2020. It explains the video was filmed in Saudi Arabia in 2016.

According to the site, the video has circulated in false social media posts about protests by the Arab world against French products.

A Google search found this article by the Arabic broadcaster Al Arabiya dated November 17, 2016. It reports that 25 trucks of chicken meat had to be discarded in Saudi Arabia after they expired.

The article also links to this YouTube video published on November 16, 2016 that shows the same event shown in the misleading Facebook posts.