A video clip of a leading opposition politician in India has been viewed thousands of times in multiple Facebook and Twitter posts alongside a claim that it shows him making a confusing remark about India’s system for classifying regional COVID-19 infections levels. The claim is false; the clip has been edited; the original video shows lawmaker Rahul Gandhi, the former president of the Indian National Congress (INC) political party, making a clear statement about the need for local control regarding COVID-19 classifications.

The six-second video has been viewed more than 2,000 times after it was published on Facebook here on May 9, 2020. 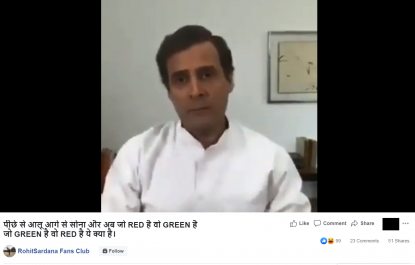 The post’s Hindi-language caption translates to English as: “Potato from behind and gold from the front, and now the red zone is green and green zone is red. What is this?”

The comment on “potato from behind and gold from the front” is a reference to another edited clip of Gandhi that was shared in April 2019. The video distorted his comments about political pledges to farmers, as AFP reported here.

“Red zone” and “green zone” refers to the colour-coded classifications system that India uses to determine necessary lockdown measures in certain areas based on the level of COVID-19 infections.

Responding to a journalist’s question at the video’s 19-minute 50-second mark, Gandhi makes a clear argument that colour classifications should be determined by state and district level authorities and not the central national government.

In the edited clip that was shared in the misleading posts, the words “at the national level” have been omitted to make Gandhi’s remarks seem unclear.