No, the head of India’s opposition Congress party did not promise to provide farmland on the moon

A video has been viewed tens of thousands of times on Facebook alongside claims it shows the head of India’s opposition party, Rahul Gandhi, making a campaign speech in which he promises to give farmers fields on the moon to grow crops. The claim is false; the clip has been edited from a longer video of a 2017 campaign speech; Gandhi’s words have been taken out of context. In the original footage, he is commenting on what he describes as Indian Prime Minister Narendra Modi's unrealistic pledges to farmers.

The video, posted here on Facebook where it has been viewed more than 50,000 times since it was published on April 11, 2019.

The 24-second clip appears to show Indian National Congress party president Rahul Gandhi at a public rally telling the crowd that he will give farmers fields on the moon to grow crops.

The Hindi audio translates to English as: “You can't make money from your farmlands here, look at the Moon. I will provide you with farmland on the moon. In the future, you will grow potatoes there. I'll put up a machine there and then we will export potato back to Gujarat."

The misleading post’s caption says: “Somebody pls stop him, He is promising he will give fields on moon to grow crop.” 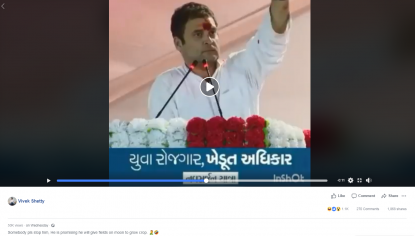 But the clip in the misleading post is an edited version of a longer video showing a Congress party rally on November 12, 2017 in Patan town in the western state of Gujarat in India.

The full-length video, including Rahul Gandhi’s comments, can be seen here on one of Congress’ official Facebook pages, where it was streamed live on  November 12, 2017.

The original video was also uploaded here on the Gujarat Congress official YouTube channel on November 17, 2017.

Gandhi starts speaking at 1 hour 58 minutes and 18 seconds and at 2 hours 18 minutes and 11 seconds Gandhi refers to Indian Prime Minister Narendra Modi, saying that Modi has been making false promises to farmers.

Gandhi says: “I don’t make false promises, even if sometimes you don’t like it. Mr. Modi says: ‘You can't make money from your farmlands here, look at the moon. I will provide you with farmland on the moon. In the future, you will grow potatoes there. I'll put up a machine there and then we will export potatoes back to Gujarat.’"

Below is the side by side comparison between the misleading post (R) and the original video (L): 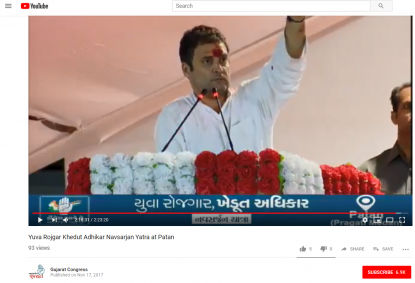 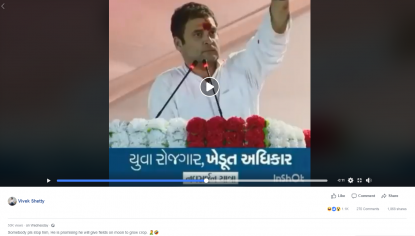 The misleading clip in this video appears from 19 minutes 57 seconds.