A video has been shared hundreds of times in multiple Facebook posts alongside a claim that it shows a Sanskrit-language poem being recited during a Hindu ceremony, held ahead of “the first entry” of US president-elect Joe Biden into the White House. However, this claim is false; the clip actually shows a 2014 event at the White House, marking the birthday of Indian independence leader Mahatma Gandhi. 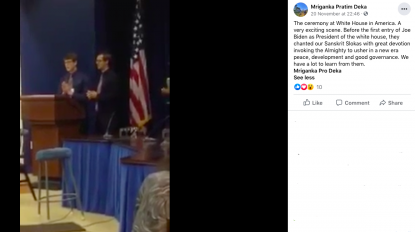 The caption of the post reads: “A ceremony at the White House in America. A very exciting scene. Ahead of the first entry of Joe Biden as President to the White House, they chanted Sanskrit slokas with great devotion, invoking the Almighty to usher in a new era of peace, development and good governance. We have a lot to learn from them.”

Sanskrit is an ancient Indo-Aryan language mostly spoken on the Indian subcontinent. Many sacred texts in Hinduism have been written in the form of Sanskirt ‘slokas’, or poetry.

Joe Biden was declared the winner of the 2020 US presidential election on November 7. As of December 1, incumbent President Trump has refused to concede and continues to make baseless claims of election fraud, as reported here by AFP.

The same video was also shared here, here, here and here on Facebook, alongside similar claims.

Mahatma Gandhi is an Indian independence icon, assassinated in New Delhi in 1948.

Below is a screenshot comparison of the video in the misleading posts (L) and the 2014 Facebook video (R): 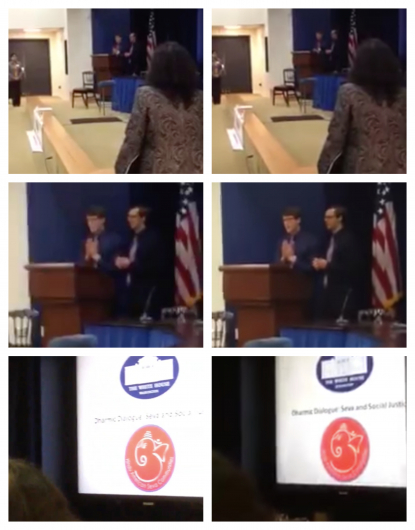 The event was also reported on by the US news outlet HuffPost here in October 2014.