A video has been viewed tens of thousands of times in multiple posts on Twitter and Facebook that claim it shows US Supreme Court Associate Justice Clarence Thomas ignoring two people who offered to shake hands with him at an event in early January 2021. The claim is false; the original video was published by UK newspaper The Guardian in October 2019. According to the report, the clip shows a pallbearer snubbing US Senator Mitch McConnell at a memorial for former senior Democratic congressman Elijah Cummings.

The video was published here on Twitter on January 5, 2021.

It was viewed more than 34,000 times before it was deleted. 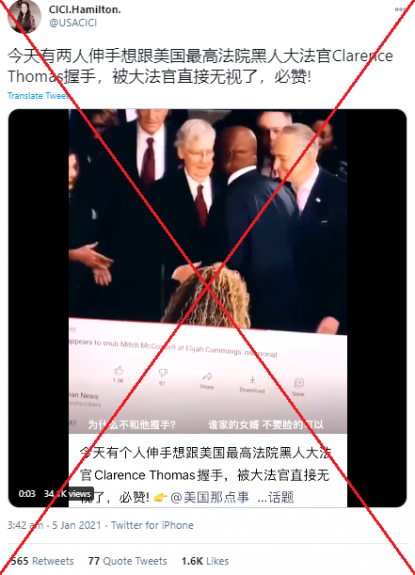 The simplified Chinese-language characters superimposed at the bottom of the video translate to English as: “Today, someone stretched out to shake hands with Clarence Thomas, the black justice of the US Supreme Court, but was immediately ignored by the justice, you must like this!”

The post’s caption, also written in simplified Chinese characters, translates to English as: “Today, two people stretched out to shake hands with Clarence Thomas, the black justice of the US Supreme Court, but were immediately ignored by the justice, you must like this!”

The video has been viewed tens of thousands of times alongside a similar claim in January 2021, including here and here on Twitter; and on Facebook here and here.

A closer analysis of the video found some English text could be seen in in the clip. It reads: “...appears to snub Mitch McConnel at Elijah Cummings’ memorial”.

Mitch McConnel is the Senate Majority Leader of the United States.

Elijah Cummings was a former senior Democratic congressman who died on October 17, 2019.

A further keyword search on Google based on the English words found the original footage was published in this video on the YouTube channel for UK newspaper The Guardian. It is dated October 25, 2019.

Identical visuals to the video in the misleading posts can be seen from the YouTube video's one-second mark to its seven-second mark.

Below is a screenshot comparison of the Twitter video (L) and the YouTube video published by The Guardian (R):