A Facebook post claims Singapore closed a subway station in January 2020 after discovering a case of novel coronavirus. The claim is false; Singapore’s Ministry of Health and Ministry of Transport denied that any part of its mass rapid transit (MRT) network had been shut down for disinfection. 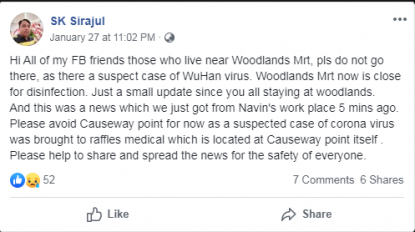 The post states: “Hi All of my FB friends those who live near Woodlands Mrt, pls do not go there, as there a suspect case of WuHan virus. Woodlands Mrt now is close for disinfection. Just a small update since you all staying at woodlands. And this was a news which we just got from Navin's work place 5 mins ago.

"Please help to share and spread the news for the safety of everyone.”

As of January 30, 2020, Singapore has reported 13 cases of the coronavirus, which has killed at least 213 people in China since the strain broke out in the Chinese city of Wuhan over a month ago.

Chinese authorities also confirmed that the number of infections has jumped to nearly 10,000, AFP reported here.

However, the claim about Singapore's MRT is false. The government refuted the assertion in a statement here, saying it is "not true" and that the MRT station in question is "fully operational."

"We advise members of the public to not speculate and/or spread unfounded rumours," the statement added.

The Ministry of Transport (MOT) also shared the statement on Facebook.

“MOT is aware of rumours circulating online that Woodlands MRT was closed for disinfection due to a suspected case of the Wuhan coronavirus infection. We would like to clarify that this is not true," the agency's post read in part.

The Ministry of Health (MOH) also posted the statement on its website here. Below is a screenshot of the official MOH page: 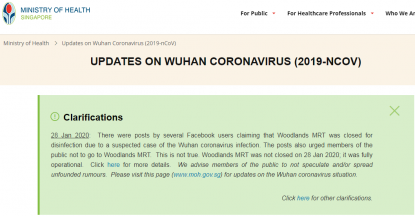 Meanwhile, Singapore’s Protection from Online Falsehoods and Manipulation Act office announced here that it had identified two Facebook users who spread the misinformation and that the agency has instructed Facebook to issue Correction Notices for the posts.