Skip to main content
A Canadian soldier helps a senior citizen with her meal on May 8, 2020, at the Grace Dart Long-Term Care Centre in Verdun, Quebec as part of Operation LASER (Canadian Armed Forces / AFP / Genevieve Beaulieu)

A post shared tens of thousands of times on Facebook claims that Canadian retirees will see their annual pension decrease by $500 in January 2021 as a result of cuts to the Canada Pension Plan (CPP) by Prime Minister Justin Trudeau’s government. This claim is false; by law CPP payments cannot be decreased and both the Minister of Seniors and retirement planning experts confirmed that pension income will increase this year. 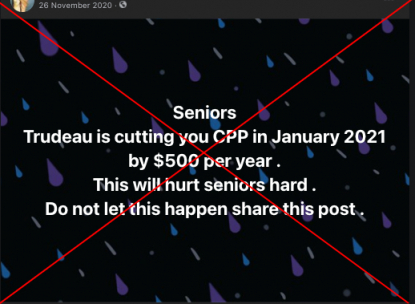 “This post made a false claim about CPP benefits,” a spokesman for the Minister of Seniors told AFP by email: “CPP is increased each year using the Consumer Price Index All-Items Index so that benefits are adjusted for the cost of living. Payments in 2021 will increase by one percent.” 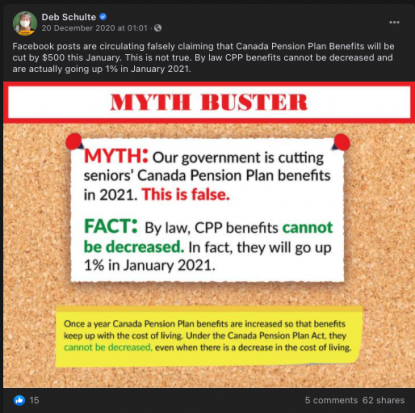 According to the Canadian Government’s website, the “average monthly amount” of CPP income is $679.16, or $8,150 a year. If the claim in the post were true, it would represent a six-percent percent decrease.

Jason Heath, Managing Director of Objective Financial Planners in Toronto said via Twitter that the claim “is not true.”

“Canada Pension Plan (CPP) recipients have their pension adjusted once a year in January,” Heath explained. “For 2021, CPP pensioners will receive one percent more than 2020.

While this does not apply in Quebec, which has its own pension plan, 2021 payments to seniors also increased in the province.

The post may have confused an increase in the amount Canadian workers are required to pay into the Canadian Pension Plan this year with benefits paid to pensioners.

A plan introduced by the Liberal government in 2016 set CPP contributions to gradually increase each year starting in 2019.

The increase could not be delayed despite the Covid-19 pandemic’s toll on the Canadian economy.

“I believe this to be mistaken with the rise in CPP contributions and not seniors receiving the CPP benefit,” Marlene Buxton a retirement income specialist who runs Buxton Financial in Toronto, said by email

“The changes that have come about are to do with the contributions to CPP which means, individuals that are working and contributing to the CPP. It works out to about $275/year increase in contributions to someone working as an employee and about $551/year for someone self-employed.”