Skip to main content
A health worker shows a box containing a bottle of Ivermectin in Cali, Colombia on July 21, 2020. (Photo by Luis ROBAYO / AFP)

As Covid-19 vaccination campaigns roll out across the world, posts circulating on social media in several countries claim that anti-parasite medication ivermectin is a “miracle drug” that cures the disease. This is misleading: as of January 14, 2021, the drug has not been scientifically proven as a prevention or treatment for Covid-19. Several scientists told AFP it should not be touted as a “cure” or “miracle drug”.

“Miracle drug Ivermectin,” reads a Korean Facebook post published on December 31, 2020. “The drug has no toxicity. I think it is a god-send gift to save the human race from Covid-19”. 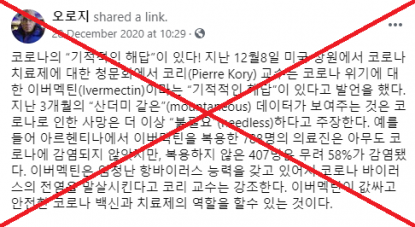 In Latin America, the popularity of ivermectin has surged, fuelled by online posts touting the drug amid a scramble to find a remedy to the pandemic that has claimed more than 1.9 million lives around the world, according to an AFP tally.

In May 2020, the Bolivian government announced it had authorised ivermectin to treat Covid-19 patients, despite admitting there was “to date no scientific evidence” supporting the drug as a treatment for the disease.

Scientists, however, have stressed that as of January 2021, there is a lack of evidence to support ivermectin as a prevention or treatment for Covid-19.

The National Institutes of Health (NIH) said in a January 14 statement that there was insufficient evidence to recommend either for or against using ivermectin to treat Covid-19.

Some clinical studies have reported benefits such as lower mortality rates in patients who received ivermectin compared to those given comparator drugs or placebo, whereas other trials “showed no benefits or worsening of disease after ivermectin use”.

“Most of the studies reported to date had incomplete information and significant methodological limitations,” it said.

FDA said in a December 16 statement that the drug had not been approved to prevent or treat the disease.

“While there are approved uses for ivermectin in people and animals, it is not approved for the prevention or treatment of COVID-19,” the agency said on its website.

It warned people not to take any purported Covid-19 medication “unless it has been prescribed to you by your healthcare provider and acquired from a legitimate source”.

Kim Woo-joo, a professor at the Korea University Hospital’s Division of Infectious Diseases in Seoul, said that more trials were needed before conclusions could be drawn about ivermectin’s efficacy.

“If we want to be 100% sure about the effectiveness of the drug, we need results from larger controlled randomised clinical trials,” he told AFP in an interview on January 7, 2021.

He said it was difficult to know if the improvement of a particular patient’s condition was due to ivermectin or not, as “some patients who are infected with Covid-19 tend to get better even without receiving proper treatment."

South Africa drug agency SAHPRA said that ivermectin “appears not to be superior to placebo in terms of viral load reduction or clinical progression” and stressed there was “no evidence from randomised controlled trials for any reduction in mortality”.

United Nations health agency Unitaid, which purchases drugs for the poorest people in developing countries, also warned that the medication was not approved as a coronavirus remedy.

The agency has been working with Britain’s Liverpool University to analyse emerging studies on ivermectin as a potential Covid-19 treatment, Unitaid spokesman Hervé Verhoosel told AFP.

“Preliminary data is promising but there is the need to await the results of further trials before determining next steps,” he said in a statement on January 7, 2021.

Ivermectin is one of a string of medications tested as a potential Covid-19 treatment since the pandemic began. Around 50 trials around the world in varying stages are listed in this US database.

Reports promoting ivermectin as a Covid-19 treatment appear to originate from a scientific study published in April in medical journal Antiviral Research, as French fact-checking organisations CheckNews and 20 Minutes suggest.

The study found that ivermectin was effective in fighting SARS-CoV-2, the virus that causes Covid-19, in in vitro tests on cells in a laboratory. However, while in vitro tests are the first step in medical testing, drugs that give promising results in a laboratory setting are frequently ineffective in humans, often because the dose required to neutralise a pathogen cannot safely be administered to patients.

“The concentrations used in vitro may not be achievable in therapeutic doses,” Rubén Hernández, pharmaceutical chemist at San Borja Arriaran hospital in Chile, told AFP.