Online posts claim that the electoral reform bill currently in Canada’s House of Commons will allow people to vote using only a voter identification card, and will facilitate voting for non-citizens. Under Bill C-76, voters would need proof of identity in addition to their Election Canada card, and voting as a non-citizen will remain an offence punishable by a fine of up to $5,000 and/or six months in prison. 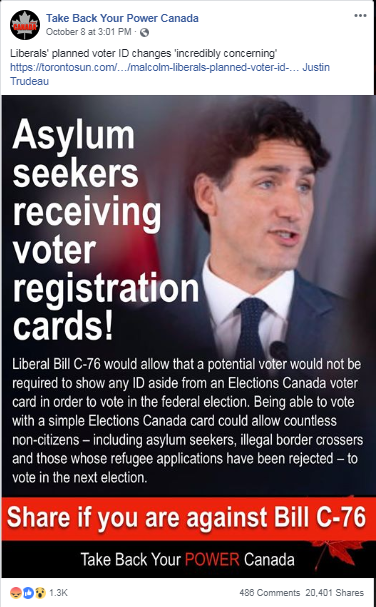 “Being able to vote with a simple Elections Canada card could allow countless non-citizens to vote in the next election.” This message and others like it shared thousands of times, on social networks, refer to the Canadian electoral reform bill.

The message generally includes the statement that non-citizens are “receiving voter registration cards,” the implication being that Justin Trudeau’s Liberal government wants to allow non-citizens to vote in order to win the next federal election.

These claims question the integrity of the voting process in Canada and fail to acknowledge that voting in federal elections will remain illegal for non-citizens and permanent residents.

The Canadian electoral reform bill, also known as Bill C-76, is currently being debated in parliamentary committees. Its aim is to bring changes to the current rules around the voting procedure defined by the Canada Elections Act.

One aim of the electoral reform is to remove “the prohibition on the Chief Electoral Officer authorizing the notice of confirmation of registration (commonly known as a “voter information card”) as identification.”

In order to vote, Canadians must currently prove who they are and where they live and most do so through a driver's license. 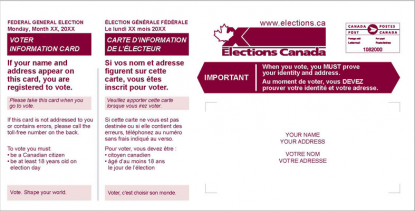 A voter information card from the 2015 federal elections (Elections Canada)

However, as Natasha Gauthier, Senior Advisor for Media Relations at Elections Canada points out: “C-76 gives the Chief Electoral Officer the power to accept the voter identification card as a form of identification. It doesn’t dictate how, nor does it say you have to allow people to show up with only their voter information card.”

Chief Electoral Officer Stéphane Perrault has stated several times that he would not allow the voter information card to be the only form of identification required. As a witness in a parliamentary committee session in May 2018, he stated that: “the voter information card would, under the proposed legislation, be allowed to be used in combination with another piece of identification.”

Elections Canada ran a pilot project in the November 2010 by-elections and 2011 federal elections in order to allow the use of the voter information card as a proof of address. Their website states:

The reason for concerns over voter identification in the misleading posts is that non-citizens sometimes receive invitations to register on the National Register of Electors by mistake. Election Canada receives information to compile the invitation list from a number of sources, Gauthier said, including the Canada Revenue Service and provincial driver’s license agencies. If it seems like someone would likely be a citizen and is not registered yet, they will be sent a voter registration notification.

However, it is illegal for non-citizens to register to vote, even if they do receive an invitation. Elections Canada’s website’s frequently asked questions section asks non-citizens to “Please ignore the content and dispose of this letter as you are not eligible to vote. If you become a Canadian citizen in the future, you can register to vote at that time.”

Indeed, voting as a non-citizen is an offence punished by the law. Section 281(c) of the Canada Elections Act states that, “No person shall, inside or outside Canada, knowingly make a false statement in an application for registration and special ballot.” Lying in order to register to vote as a non-citizen counts as a false statement, and such an offence “is liable on summary conviction to a fine of not more than $5,000 or to imprisonment for a term of not more than six months, or to both,” according to subsection 500(2) of the Act.

Non-citizens are indeed accidentally invited to register to vote at times, but they are not legally allowed to accept the invitation. The electoral reform bill will still require people to present a proof of identification bearing their name in addition to their voter information card.