A photo shared on Twitter and Facebook claims to show Conservative Party of Canada members voting in favor of reopening the abortion debate. This is misleading. Conservative Party members did win such a vote at the party’s convention in Halifax in 2018, but the proposal was voted down when it was considered by the party’s national delegates. The Conservatives have been criticized for being ambiguous on the topic, but official party policy does not question the legality of abortion.

A photo showing dozens of men raising a green flyer stamped with the Conservative Party of Canada’s emblematic “C” has been shared hundreds of times in the weeks preceding the October 21 federal elections.

A message typed over the image says, “This is the Conservative convention. Here they are voting to restart the debate over women’s access to abortion. 82% voted in favour...Canada’s Conservatives say they’ve changed. But they’re still just the same far-right party.” 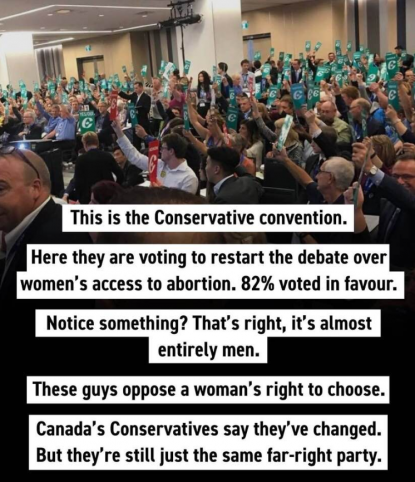 A similar message was shared earlier this year on Twitter, although not in a meme format and with more precision over the date of the photo, which was taken in August 2018.

From August 23-25, 2018, the Conservative Party of Canada held a convention in Halifax in order to decide party policy and strategy for the 2019 federal elections. Between speeches by party officials, break-out sessions gave some of the 3,000 attendees the opportunity to vote on party policy.

It was during one of those sessions that 82 percent of the audience voted to reopen the abortion debate, as Alissa Golob, a pro-life organizer, pointed out in a Facebook post describing the voting process using the same photo as the meme above.

“I did take the picture and I did vote in the break out session,” Golob told AFP via Facebook Messenger.

The intent of the vote was to remove the sentence, “A Conservative Government will not support any legislation to regulate abortion,” from the CPC policy book. This sentence ensures that a Conservative government would not table legislation on abortion rights in Canada. It has been enshrined in the Conservative Party policy book since 2005.

However, the vote by CPC members in the break-out session only guaranteed that the abortion question would be subject to a plenary vote the next day, in the presence of all 3,000 members of the party. The following day, the motion failed, with only 47 percent support.

Party leader Andrew Scheer has come under fire for his alleged inconsistency on the question despite the official party policy.

In 2017, he told RightNow, a pro-life group, in an interview that he would respect his members of parliament’s right to bring up the issue, and to “allow for a diversity of views on these issues within our own caucus.”

In August 2019, Scheer said that he would oppose attempts to start the abortion debate in the House of Commons.

Since then, Scheer has been repeatedly asked about his stance on the abortion debate on the campaign trail. When asked specifically whether he would allow backbench MPs to table bills to regulate abortion, Scheer reiterated that his government does not wish to reopen the debate, and would oppose any such bill.

This did not convince Liberal Party officials who continue to bring up concerns of a “hidden anti-abortion agenda” in the Conservative Party.

“Every election, the Liberals use the same tactic of the hidden agenda. It didn’t happen under Harper, and it will not happen under Andrew Scheer,” a source within the Conservative party told AFP in reference to the reopening of the abortion debate.

Although the Conservative Party members in the photo shared on social media did indeed vote to reopen the abortion debate, they were defeated in a plenary vote the next day. The official Conservative Party of Canada stance on abortion remains that as a government it will oppose any legislation to restrict access to the procedure.