A photo of American movie star and former governor of California Arnold Schwarzenegger wrapped in a sleeping bag at the foot of his own statue has been shared thousands of times on social media since 2018. The posts claim that Schwarzenegger was forced to sleep on the streets after being denied accommodation at the hotel to which the statue belongs. This is false; although Schwarzenegger is the man in the photo, he took the photo as a joke in 2016.

The photo of the actor and former governor has circulated online since at least January 2018 and has been shared about 80,000 times on Facebook in the three years since. It recently resurfaced on Twitter in English here and on Facebook in French here. AFP Fact Check debunked the claims in French here.

Wrapped in a green sleeping bag, Schwarzenegger appears to be asleep at the foot of a statue engraved with his first name.

“Arnold Schwarzenegger posted a photo of himself sleeping on the street under his famous bronze statue,” the caption of the recent tweet reads. 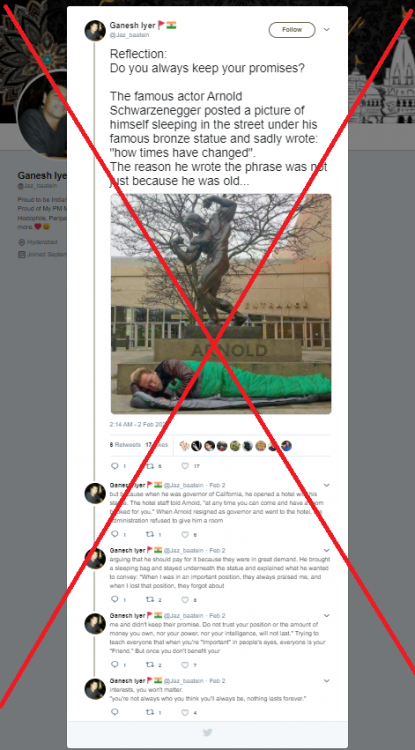 The post further claims that Schwarzenegger “opened a hotel with his statue” when he was governor of California and that the hotel personnel had promised Schwarzenneger that “at any time you can come and have a room booked for you”. But at the end of Schwarzenneger’s two terms as governor, “the administration refused to give him a room”.

A similar story with the same photo also appeared in several Facebook posts in late 2020 (see here, here and here).

Screenshot of one of the Facebook posts, taken April 30, 2021

A real photo, but an invented story

The image was actually first published by Schwarzenegger himself.

By conducting a reverse image search on TinEye, AFP Fact Check found the photo in an article published online in People Magazine, an American celebrity news site, on January 15, 2016. The People article explains that the American actor posted the photo on his verified Instagram account on January 15, 2016, with the caption “How the times have changed”.

According to People, the photo was taken in front of the Greater Columbus Convention Center in Ohio at the foot of a statue erected in Schwarzenegger’s honor. AFP Fact Check located the statue on Google Maps here. Contrary to the claims in the false social media posts, the statue is not in front of a hotel.

Schwarzenegger had this photo taken while in Columbus filming the movie “Aftermath”, according to the People article.

Although the image is authentic, the story shared on social media about Schwarzenneger’s homelessness is false.

The American celebrity is far from penniless; Schwarzenegger’s fortune is estimated to be $300 million to $400 million, according to several sites that report on wealth and net worth (see here, here, and here).

Born in 1947 in Austria, Schwarzenegger moved to the United States in 1968. The Hollywood actor, politician and environmentalist built his fortune during a prolific career.