Facebook posts shared thousands of times in Canada claim that parliament has passed a law that would allow the government to quarantine a child who showed COVID-19 symptoms at school separately from a parent. This is false; Canada’s legislature has not passed any such law during the pandemic, and an expert said such legislation, federal or provincial, would easily be struck down as unconstitutional in the courts.

“FOR ALL THE CARING PARENTS OUT THERE WHOS KIDS MAYBE GOING BACK IN SEPTEMBER… YOUS NEED TO READ THIS,” begin the posts from August 2020.

They describe a scenario in which a child who starts to show signs of illness at school is quarantined in a location that administrators refuse to disclose to the parent.

They end with the warning: “I suggest every parent on my facebook gets off there arse and does some real research on the legislation of the covid act 2020 regarding the laws for children in school!!!! They are stripping your rights as a parent.” 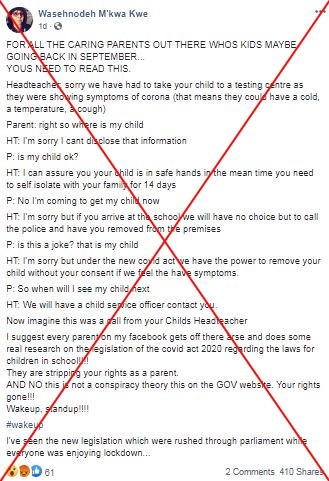 The same claim was shared on Facebook in here, here, here and here and on Twitter here.

The posts describe a “COVID act 2020,” but no such law exists in Canada.

In March, the House of Commons amended several existing laws in order to respond to the pandemic, but Canada has not yet invoked extraordinary powers under the Emergencies Act, according to the law firm McCarthy Tetrault, which is tracking changes to federal and provincial regulations related to COVID-19.

Canada’s federal government is using the 2005 Quarantine Act as its legal authority to prevent the spread of communicable diseases in the country that has now recorded just over 9,000 deaths from the novel coronavirus.

“There are no new pieces of legislation created by either the federal or provincial governments that would give the type of power described in the post,” Amy Swiffen, Associate Professor at Concordia University, explained in an email.

While provinces do have some emergency powers during the pandemic, “the government cannot separate parents from children in the way described,” Swiffen said.

This was echoed by Emmett Macfarlane, Associate Professor at the University of Waterloo, who called the posts “utterly false.”

“There is nothing in existing legislation or any government proposal that would allow children to be moved or isolated without parental knowledge and/or consent,” he said in an email.

“If the government (at any level, federal or provincial) were to attempt to pass something allowing detention of children from their parents, it would be easily struck down by the courts as unconstitutional.”

Initially, the post did not specify that the claim was specific to the UK. It was edited on August 13 to include the disclaimer, “This is for the UK,” but not before it had received more than 72,000 shares. 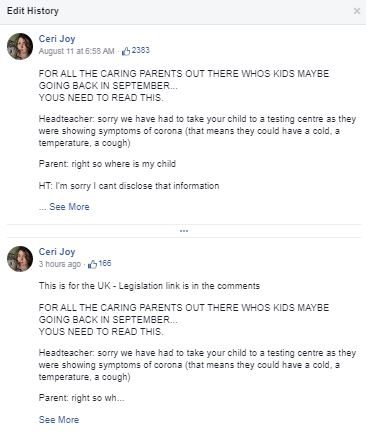 However, it is false to claim that head teachers or school administrators would have the power to quarantine a child and false that parents or guardians would not be informed of any actions related to their children, according to Nicholas Clapham, teaching fellow at the University of Surrey.

Schedule 21 specifies that, during any action against a child suspected of being infectious, he or she must be accompanied by a parent or appropriate adult.

At the time the Act was passed, and again in response to August 2020 social media posts, Children’s Commissioner Anne Longfield asked the government to clarify the powers under Section 21.

She published the following response from the British government: “It is not true that Public Health Officers have the power to screen and assess without a parent or carer present. This power can only be exercised in the presence of an individual with responsibility for the child.”

Clapham also pointed out in an email to AFP that, “Current Government guidance is to self-isolate and seek a test where appropriate rather than to use police action in such cases.”

AFP Fact Check has also debunked the false claim that children needing treatment for COVID-19 would be taken to hospital without a parent.