An image has been shared hundreds of times in multiple Facebook posts in August 2020 which claim it shows “Chinese tourists allowed to go out of the Auckland bubble”. The posts were shared after New Zealand's government reimposed a coronavirus lockdown on the city of Auckland after it recorded the country’s first local transmissions of COVID-19 in more than 100 days. The claim in the posts is false; the image has circulated online in news reports since at least 2016; New Zealand health officials said no tourists have been allowed into the country since March 2020 due to the coronavirus pandemic.

The image was posted here on Facebook by a New Zealand-based user on August 12, 2020. The post has been shared more than 100 times. 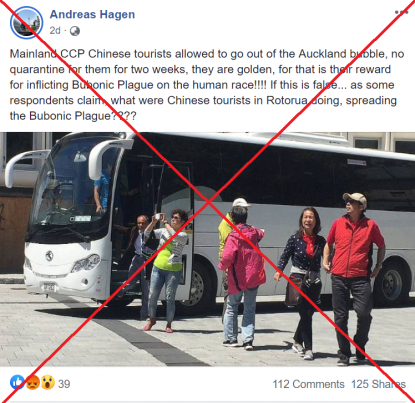 The post’s caption reads in part: “Mainland CCP Chinese tourists allowed to go out of the Auckland bubble, no quarantine for them for two weeks.”

The claim circulated online following the New Zealand government's announcement on August 11, 2020 that coronavirus lockdown measures would be reimposed in Auckland. The move came after four COVID-19 cases were reported in the city -- the first cases in the country in 102 consecutive days, AFP reported here.

The image was also shared hundreds of times on Facebook here and here alongside a similar claim.

A reverse image search on Google found the image in the misleading post published in this January 2016 article by New Zealand media outlet Stuff.

The photograph was credited to Stacy Squires, a photographer for Stuff.

Below is a screenshot comparison of the image in the misleading post (L) and the 2016 Stuff photo (R):

In response to an AFP inquiry on August 14, a New Zealand Ministry of Health spokesperson said tourists had been banned from entering the country since March 2020.

“Tourists from any country have been unable to enter New Zealand since our borders were closed prior to level 4 lockdown in March 2020. To enter NZ after this date you need to be a New Zealand citizen or resident, or meet strict exception criteria,” the spokesperson said in an email.