Brett Kavanaugh’s house was not vandalized by protesters

Reports claim that a mob of protesters vandalized the home of US Supreme Court nominee Brett Kavanaugh. Kavanaugh’s house was not attacked, and the photo illustrating the reports was taken in Canada in 2016.

“Protesters wearing masks, shouted profane slogans, waved signs, and threw calendars, bricks, and bottles at the property,” of Brett Kavanaugh, the controversial American Supreme Court nominee, according to an article on abcnews.live, a spoof of the American Broadcasting Channel’s website. Despite the current climate of political division in US politics, no mob of “200 left-wing protesters” launched a coordinated attack on Kavanaugh’s house. The address of the house mentioned in the story, 1512 Whiteman Street in Mayo Lake, PA, does not exist. No town bears the name of Mayo Lake in Pennsylvania, and Judge Kavanaugh and his family actually live in the US state of Maryland.

One of the photos illustrating the false article shows two women erasing graffiti from a house, and was allegedly taken by Kavanaugh’s neighbors, according to the trumpbetrayed.us article. 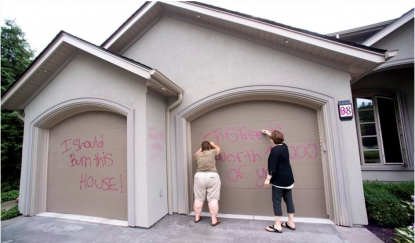 October 3, 2018 screenshot of the original photo taken in 2016 in Ontario for the Hamilton Spectator (Cathie Coward)

The picture was not taken in Mayo Lake, Pennsylvania, nor was it taken in the United States. It was taken by Cathie Coward, a Hamilton Spectator staff photographer, in 2016 in Ancaster, Ontario, in Canada.

The house in the photo was vandalized in a misdirected reprisal against its owners, thought to have cut down a city-owned tree, when city workers had in fact cut the tree down, the Hamilton Spectator reported at the time. The inscription, “This tree is worth 10,000 of you” is visible on the photograph even in the fabricated story.

America’s Last Line of Defense and its affiliated websites and Facebook pages have started many viral rumours in the past, always written as satire, yet often mistaken for true stories.