Skip to main content
Beef ribs are seen at the meat pavilion of the Rungis international food market in Rungis, France on November 19, 2015 (AFP / Adrien Morlent)

An article shared more than 65,000 times on Facebook claims that Canada’s food safety agency recalled contaminated beef products sold at Walmart stores in February 2020. This is false; both the agency and the retailer denied it, and there was no recall for beef products in Canada that month.

“Beef products sold at Walmart recalled due to E. coli,” reads the headline of the article published on February 5, 2020.

It claims that the Canadian Food Inspection Agency (CFIA) issued a recall on all beef products sold at Walmart stores in the country on February 3. The recall was allegedly expanded to include products sold at “Pusateri’s Fine Foods, and others in Ontario, Quebec, Alberta, Saskatchewan, Manitoba, Nunavut, Northwest Territories, and New Brunswick.” 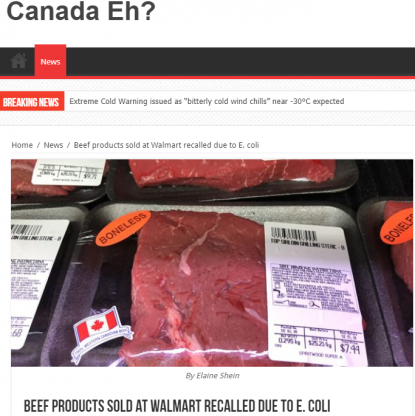 Screenshot of the false article taken on February 14, 2020

But the CFIA’s website, which lists all active food recalls in the country, shows that there has not been a recent recall for beef products of any kind, nor were there any recalls issued on February 3. 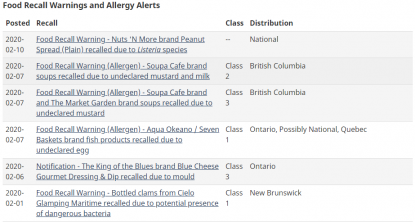 Marsha Johnston, the agency’s spokeswoman, confirmed that “the CFIA did not issue a recall.”

“Walmart Canada does sell beef products and there are no recalls on any of these,” Felicia Fefer, a Walmart representative, told AFP by email.

The last CFIA warning for any beef product was published on January 17 and was about a type of beef sausages made by VG Meats and sold in Ontario.

It is highly unlikely that a recall for beef products was issued on February 3 and subsequently deleted, because recalls usually remain on CFIA’s website “for a few years in case someone still has some of the product in their freezer,” Christine Carnaffan, another CFIA spokesperson, told AFP.

AFP Fact Check has debunked false content from the source of this incorrect warning, toronto-ontario.news, in the past. In July 2019, the website warned of an E. coli outbreak affecting lettuce sold in the central Canadian province of Ontario.

AFP also debunked false reports of a recall of 400 million eggs in Canada in June 2019 due to a salmonella outbreak.

Consumers who want more information about product recalls in Canada can learn about the food safety investigation process on this webpage.