Facebook posts circulating in March 2021 claim that AstraZeneca is preparing to file a lawsuit against South Korean media outlets for damages. The claim is missing context: the pharmaceutical giant told AFP the claim is groundless and that it has reported the “fake news” to authorities; a lawyer told AFP that disputes between companies and domestic media are typically handled by the Press Arbitration Commission in South Korea, not by lawsuit.

“Global pharmaceutical company AstraZeneca is preparing to file a damage suit against domestic media outlets that would cost them multi million won,” the Korean-language post reads.

Major South Korean newspaper Chosun Ilbo “will need to pay 50% of that cost,” it said. 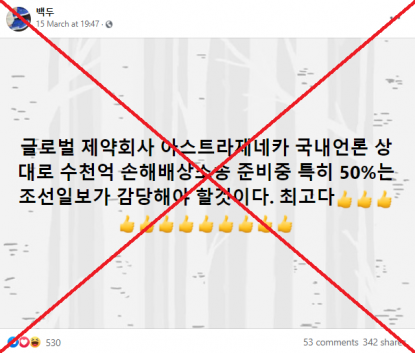 The claim was also shared on Facebook here, here and here.

But the claim is missing context.

Contacted by AFP, a spokesperson at AstraZeneca’s Seoul office said the posts were groundless.

“The claim is utterly false. We have reported it to the South Korean health authorities as fake news,” the spokesperson said during a phone interview on March 18, 2021.

A surge in misinformation about vaccines has prompted concern in South Korea, with the ruling Democratic Party pushing for legislation to punish media organisations and websites that contribute to the spread of false news.

Major South Korean media organisations have said any such regulations would constitute an attack on free speech.

“There is a growing concern that domestic media outlets might face a damage suit from international companies,” the Korean-language report claims.

The Gobal News report singled out Chosun Ilbo's reporting, pointing to this article, which does not explain until paragraph six that the Austria vaccine halt only applied to one batch of the AstraZeneca jab.

Chosun Ilbo did not respond to an AFP request for comment.

-- What happened in Austria --

Austria did suspend distribution of one batch -- the ABV 5300 batch -- of the AstraZeneca vaccine on March 8, 2021 following the death of a 49-year-old nurse from “severe blood coagulation problems” days after receiving the jab, AFP reported here.

Authorities said the decision was taken as a precaution as there was no evidence of a causal link between the jab and the woman's death. Here is the official government announcement.

Austria resumed distribution of the ABV 5300 batch on March 19, 2021, after a European Medicines Agency report found there was no evidence of a problem related to specific batches of the vaccine.

Disputes over media reports in South Korea are typically dealt with by the Press Arbitration Commission (PAC) before they are taken to court, Lim Ju-hea, head lawyer at Seoul-based Yours Law Office, told AFP.

“People could request the PAC to revise, block or even take down news reports in question. It takes much less time than bringing the matter to the court,” she said during a phone interview with AFP on March 19, 2021.

“I would say this is a more ‘preferred’ way for those who experience such issues,” Lim added.

Media companies in South Korea are liable for any damage caused by false reports only when it can be proven in court that they intentionally ran such reports to slander or cause damage, she said.

Keyword and government record site searches did not find any previous cases where international companies have filed lawsuits for damages against domestic media in South Korea.