Skip to main content
An election canvasser in the suburbs of Phoenix, Arizona on October 15, 2020 (AFP / Robyn Beck)

Arizona parents did not oust school board over mask mandate

Social media posts claim that a group of parents in Vail, Arizona successfully and legally took over the school board and revoked a mask requirement. This is false; a spokeswoman for the school system said the original board members remain in place, as does the mask rule, and a senior education official reiterated that face coverings are still required as protection against coronavirus.

Tim Swain, who is challenging incumbent US Senator Tim Scott in the 2022 Republican primary for South Carolina, tweeted on April 27, 2021: “WOW. Parents in Vail, Arizona just took over the school board - all according to the rules. Voted in a whole new board, and immediately removed the mask mandate. Democracy in action! Just Amazing!” 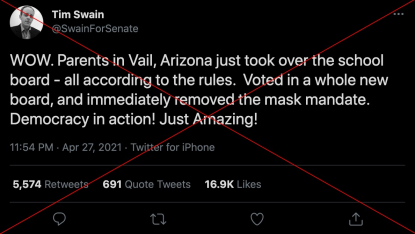 Arizona’s Republican Governor Doug Ducey on April 19 removed the statewide mandate requiring masks in schools, but said: “K-12 school districts and charter schools still maintain the right to institute and enforce policies to mitigate against Covid-19 spread, including the use of masks.”

Face covering requirements remain a flashpoint in the United States for those who view them as an inconvenience or a brake on personal freedom, although guidelines are easing alongside the country’s widespread vaccination drive. Inaccurate information about masks has flourished online.

Vail School District’s director of communications and public affairs Darcy Mentone told AFP the claims are false because democratic procedures were not followed.

She said a school district governing board in Arizona is selected by a general election. Normal term length for Vail district school board members is four years, and registered voters can cast a ballot in even-numbered years as part of the general election.

“To remove a school board member, you need to get enough signatures to call for a recall election,” Mentone said.

This is confirmed in Arizona law.

But Mentone said the protesting parents did not follow this protocol. Instead, “frustrated” community members -- some from outside the Vail district -- turned up at a school board meeting on April 27.

“They did a mock election. And then the newly-elected pretend board removed the mask mandate. So there was absolutely nothing legal about it.

“The problem was that they immediately took to social media and posted it on social media as if it was true and legal, and so it really confused members of our community,” she added.

According to the school district's website, “all students and staff are required to use a face covering while on District property.”

Another tweet shared more than 13,000 times claims that the original school board members quit after the incident. 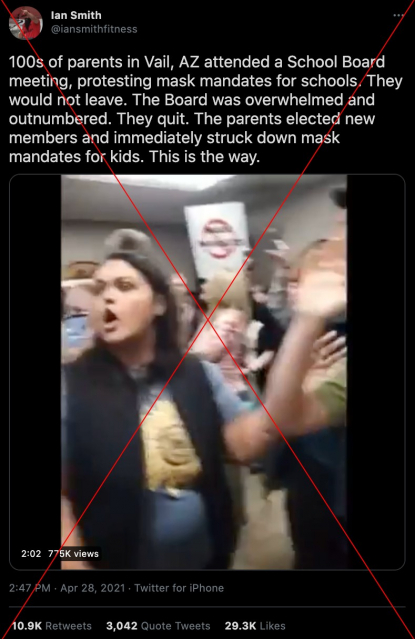 More examples are available on Facebook here and here.

The board members were unable to hold their meeting, but they did not quit. “They are all still in place,” Mentone said.

Mentone forwarded to AFP the school’s email sent to Vail parents following the attempted takeover. In it, Superintendent John Carruth confirmed that the meeting would be rescheduled and said: “I am writing to clarify that the Vail School District mitigation plans, including the requirement for face coverings, remain in place.”

He continued: “This evening, our Governing Board meeting was disrupted by a group of people, several of whom lived outside our district. The meeting had to be canceled and will be rescheduled soon. I feel bad for the parents who were there tonight who simply wanted to address the board with their concerns. Another opportunity will be provided in a peaceful and respectful setting.” 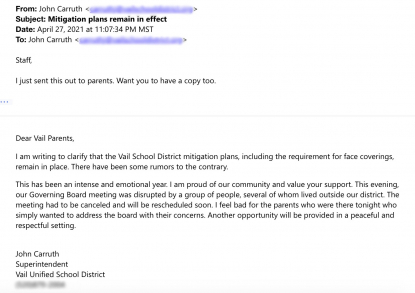 AFP Fact Check has debunked other misinformation about masks and children here and here.