A photograph has been shared over a hundred times on Facebook with claims that it shows the arrest of Getachew Assefa, Ethiopia’s fugitive ex-intelligence chief and a leading member of the Tigrayan People’s Liberation Front (TPLF). This is false; the image was digitally altered to add his face. The original photo shows the arrest of a Tigrayan general back in 2018.

The post, written in Amharic, reads in part: “Getachew Assefa, who has been committing atrocities against Ethiopian youth, was arrested at 5 PM. Getachew Assefa was arrested today when the Ethiopian Defence Force took control of the city of Adigrat, with the help of the local population.” 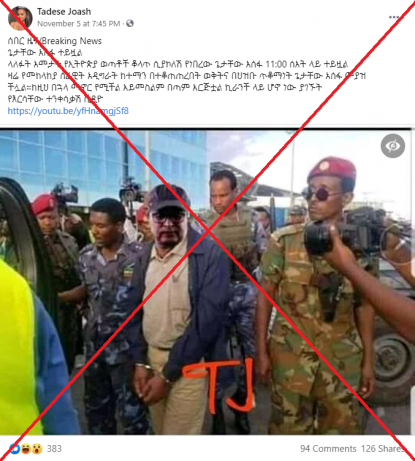 Tensions have escalated in recent weeks between the TPLF in Ethiopia’s restive northern Tigray region and the national government of Prime Minister Abiy Ahmed, with regional opposition leaders accusing his administration of discrimination.

Getachew, who once headed Ethiopia’s intelligence service, has been on the run since 2018 when Abiy – elected earlier that year – issued a warrant for his arrest.

However, this photo has been digitally altered, as can be spotted from the different quality of light on the man’s face compared to the rest of the image.

A reverse image search shows that the original photo, published online in 2018, contains a major difference: the face of the arrested man is not Getachew’s but that of general Kinfe Dagnew. 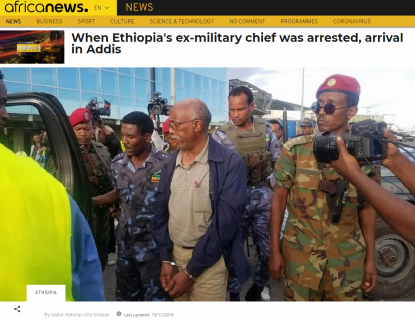 Update: Handcuffed & surrounded by heavily armed military men, B/General Kinfe Dagnew, former CEO of #MeTEC, a multi-billion dollar corporate run by the military & is at the center of grand corruption probe, has arrived in #AddisAbeba this afternoon. Vid: https://t.co/oqpN5noiI6 pic.twitter.com/lbRYWdKqsb

Kinfe was arrested in November 2018 after a documentary aired on state-run television alleging widespread embezzlement by the military-run conglomerate Metal and Engineering Corporation, where the general had formerly served as chief executive.

At the time, the TPLF’s leadership accused Abiy's government of arresting members of the Tigray ethnic group in a politically-driven crackdown, citing Kinfe’s case as an example.

President Abiy announced a military campaign in Tigray on November 4, 2020, saying it was in response to TPLF attacks on federal military camps.

This move escalated his long-running feud with the TPLF, which dominated Ethiopian politics for nearly three decades before Abiy took office.

A communications blackout in the Tigray region has made it hard to get a clear view of hostilities entering their third week. Sudan reported 36,000 people had streamed across its borders to escape the violence.