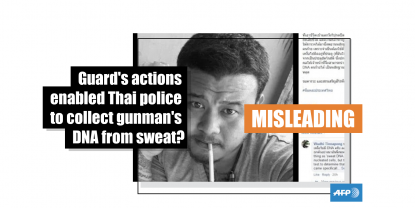 Published on Thursday 30 January 2020 at 04:30
A photo of man has been shared thousands of times in multiple posts on Facebook and Twitter alongside a claim that he was a security guard who was shot dead while attempting to thwart a gunman in Thailand. The posts claim that Thai police obtained vital DNA evidence from the gunman’s sweat because of the guard’s actions. The claim is misleading; the man in the photo has been identified as the security guard killed in the robbery, but police said they were not been able to extract the gunman’s DNA from sweat.
Read more 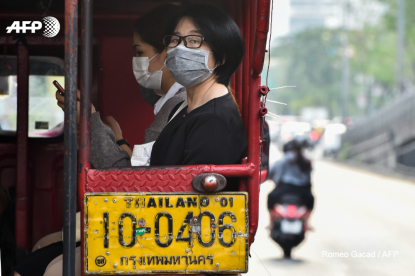 Published on Monday 27 January 2020 at 03:40
Multiple Thai-language posts on Facebook, Twitter and Line, a messaging app, circulated in January 2020 claiming that applying petroleum jelly around your nostrils will protect against dangerous air pollutants. The claim is false; the Thai Ministry of Public Health said there was no evidence to show that petroleum jelly provides effective protection against air pollution.
Read more 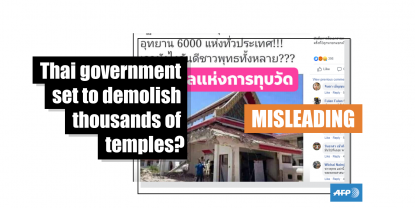 This photo shows the destruction of a Thai temple in 2015; the Thai government denies it is preparing to demolish temples

Published on Friday 24 January 2020 at 08:10
A photo of a partially destroyed structure has been shared almost two thousand times on Facebook alongside a claim the Thai government is preparing to order the demolition of 6,000 temples in national parks throughout Thailand. But the photo has been shared in a misleading context; it shows the destruction of Thailand's Kalayanamitr Temple in 2015; the Thai government has refuted the claim it is preparing to demolish thousands of temples.
Read more 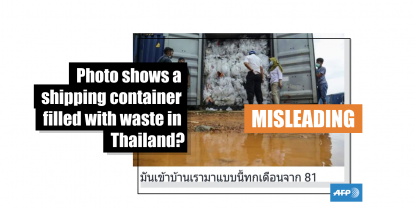 Published on Wednesday 22 January 2020 at 03:00
A photo of a rubbish-filled shipping container has been shared thousands of times in multiple posts on Facebook alongside a claim that Thailand receives tens of thousands of tonnes of "rubbish" per month from 81 countries worldwide. Research by an NGO found that Thailand imports used plastics scraps from 81 countries, but the photo is being used in a misleading context. In fact, the picture was taken by AFP and shows a shipping container loaded with rubbish in Indonesia, not Thailand.
Read more 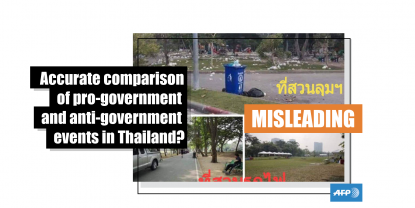 No, one of these photos shows a park in south Thailand -- it does not show a littered park after a pro-government event in Bangkok

Published on Monday 20 January 2020 at 06:25
Three photos have been shared tens of thousands of times in multiple Facebook and Twitter posts in January 2020 alongside a claim that one of them shows rubbish left behind by pro-government activists in Thailand’s capital of Bangkok and the other two show the aftermath of an anti-government event at another Bangkok park. The photos have been shared in a misleading context; the first photo shows the aftermath of a family event in Yala Province in the south of Thailand; the other two photos were indeed taken after an anti-government event in Bangkok.
Read more