Multiple posts on social media in Nigeria claim that the United Kingdom terminated a deal with Chinese tech company Huawei after receiving contaminated coronavirus test kits. This is false; the UK has made no such move while the tainted test kits came from Luxembourg.

One of the posts, a tweet by Nigeria’s former minister of aviation Femi Fani-Kayode, has been reshared more than 1,500 times. It claims that Britain pulled “out of 5G contract with Chinese firm Huawei after test kits were found contaminated with Corona virus (sic)”. 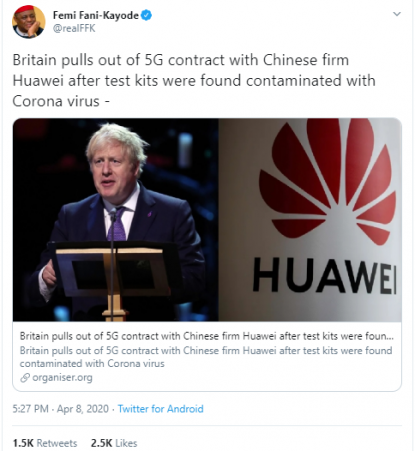 A screenshot taken on April 21, 2020, showing the misleading post

Links to this same article have also been shared on Facebook and on blogs in Nigeria here, here, here, and here.

In March, the UK Telegraph reported that Britain’s attempt to ramp up mass coronavirus testing suffered a setback after key components of the test kits ordered from Luxembourg-based Eurofins were found to be contaminated with coronavirus.

The social media posts claim that the contaminated elements of the test kits were from China. But the Telegraph article makes no mention of the contamination’s source.

Next-generation 5G wireless data networks have been the subject of global conspiracy theories linked to COVID-19, some of them debunked here by AFP.

As a result, attacks have been carried out on network towers in the UK.

Did the UK pull out of 5G deal with Huawei?

In January 2020, the UK government approved a limited role for Huawei in the rollout of its 5G network.

However, critics are still concerned about what they see as a potential security risk to the country and, according to the BBC, some members of parliament and senior officials in government have lobbied for an end to the deal.

There has been no announcement by the UK terminating the agreement with Huawei.

A spokesman for the prime minister's office dismissed the claims of a causal link between 5G and COVID-19 as “complete nonsense”.

"We have received reports of criminal damage to phone masts that have apparently been inspired by this crazed conspiracy theory, which is circulating online.

“Our telecoms networks are providing essential connectivity to the essential services and the NHS (National Health Service), and enabling people to remain in contact with loved ones during this difficult time.

“These criminal acts are endangering lives and they must stop. We are clear that anyone who is caught should face the full force of the law. We are also working with social media sites to try to halt the spread of these malicious falsehoods."

Fact-checking journalist in Nigeria
All posts

This video shows FBI agents raiding a private home, not a synagogue