A video has been shared in multiple posts on Facebook and Twitter alongside a claim that it shows Muslims spreading the novel coronavirus, COVID-19, by smearing saliva on plates and utensils in the Indian city of Delhi. This claim is false; the video actually shows Bohra Muslims practicing their zero-waste dining etiquette in Mumbai, India in 2018. 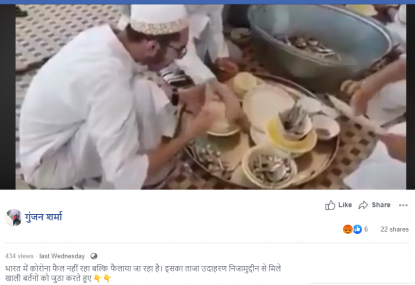 The post’s Hindi-language caption translates to English as: “Coronavirus is not spreading in India but it is being spread in the country. The latest example was found from Nizamuddin.”

Nizamuddin is a locality in Delhi with a large Muslim population. It has also been identified as a major COVID-19 hotspot after at least 10 deaths and several infections were linked to an Islamic religious gathering in the area, AFP reported.

Below is a screenshot of the video on Vimeo: 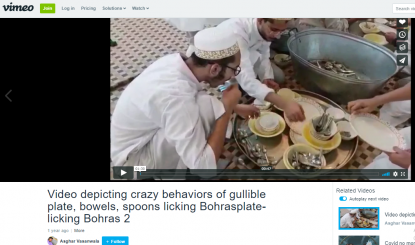 The video caption reads, in part: “Please watch this video depicting crazy behaviors of these gullible Bohras. Bohra chief priest Syedna Mufaddal, also called SMS, has directed Bohras to clean their big 4’-5’ group-eating plate called Thal. So, these brainwashed Bohras who are trained to follow each word of Syedna as a knee jerk reaction, are licking dirty plates, bowels, spoons and eat every grain and drop of waste food. They are not hungry like dogs in the picture, they eat and overfill their stomachs, just for fulfilling command of SMS.”

Syedna Mufaddal is a religious leader among the Bohra community, a sect within Islam.

On a community website, Bohra Muslims’ dining etiquette is described as: “Bohras have a no-wastage policy so not a single morsel should be left on the thaal when it is taken away.”

In response to the misleading video, Huzaifa Patanwala, a member of Mumbai’s Bohra Committee, told AFP that the footage was taken in 2018, almost a year before the COVID-19 outbreak.

“The video circulating on social media and claiming that Muslims are licking utensils to spread coronavirus is fake and grossly misconstrued. The video was made by some students of our community in 2018,” he said.

Murtaza B. Sadri, another member of the Bohra Committee, added that the video was filmed at the community centre in Marol area of Mumbai to educate “community members against wastage of food as per the teachings of our spiritual leader”.

He said: “Not to waste even a single grain of food is one of the many pillars of teachings of our spiritual leader Syedna and this video was shot by seminary students of our community to demonstrate how to do it.”