Skip to main content
A young woman (C) browses her smartphone while walking with a friend along a street next to the Hou Hai Lake (not pictured) in Beijing on October 28, 2020. (AFP / Nicolas Asfouri)

A video has been viewed thousands of times in multiple Facebook and YouTube posts alongside a claim it shows a CNN journalist deliberately mistranslating a Chinese man’s comments in a report about coronavirus lockdowns in China. The posts claim the purported journalist attempted to exaggerate the severity of the lockdown in a Chinese city. The footage, however, is not a genuine CNN report: it was taken from a satirical video created by a Weibo user that mocked Western media reporting. 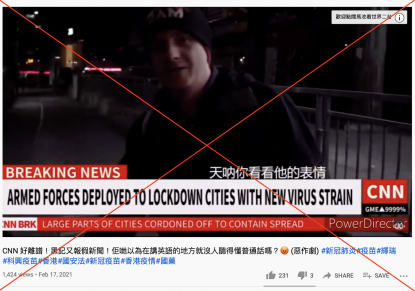 The video is titled: “CNN is ridiculous! Devilish reporters report fake news again! They really thought that no one can understand Mandarin in a country [like the United States] where English is spoken?”

The video purports to show a real interview conducted by a CNN reporter with a man sat on a street in China.

The purported reporter can be seen asking the man in Mandarin why he is drinking alone. In response, the man says: “I just ate my dinner so I’m just scrolling through my phone".

The purported reporter then turns to the camera before mistranslating the man's response.

“Jesus,” he says, turning to the camera. “This man told me that his family has been taken away, that his brother's sick and that he can't get out. And that the only thing that's left to do is drink. And really, I can't blame him. Poor guy."

Comments on the video from some YouTube users indicated they were misled by the clip.

“We really have to spread  this video to warn everyone to be careful with these kinds of media,” one YouTube user commented.

“It is their tactic to use this slander to spread rumours out of nothing,” another said.

Another person called the video “shameless” and “full of lies”.

A screenshot, taken on February 18, 2021, of a selection of comments under the YouTube video.

The same video was shared alongside a similar claim on Facebook here, here and here, and on Vimeo here.

The footage, however, is not a genuine CNN report.

A reverse image search on Google found the original eight-minute video published here on Weibo on February 10, 2021. It was shared by a Weibo account called "Comrade James". The video, which has been viewed more than 103,000 times, is titled: “How to become a CNN reporter?” 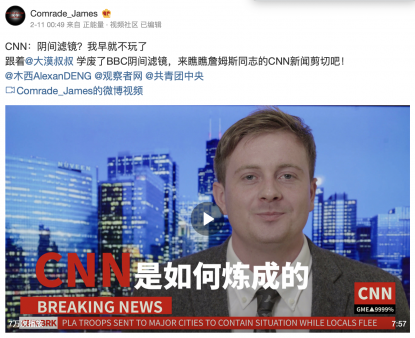 A screenshot, taken on February 21, 2021, of the original Weibo video.

The video shows a man who gives his name as "James" and describes himself as a British student in China. He can be seen playing the role of a journalist for a report titled "CNN Global Bullcast".

“I want to prove to you guys that if you have a mouth, half a brain, a hat and a couple of jackets, you can make fake news too," he says.

The video shows him walking around the southern Chinese city of Shenzhen, mockingly highlighting everyday aspects of life as evidence of an imminent coronavirus lockdown by Chinese armed forces. A shopping mall named COCO City can be seen at the beginning of the video.

"For all those unlucky enough to escape, this is what awaits them. It's basically a Chinese concentration camp," the video creator says, pointing to the bars around a basketball court.

In another part of the video, he points to a congested highway, which apparently “"shows the desperation of the people trying to flee the city”.

"James" can be seen playing the role of the both the news anchor and reporter, as shown in the screenshot below: 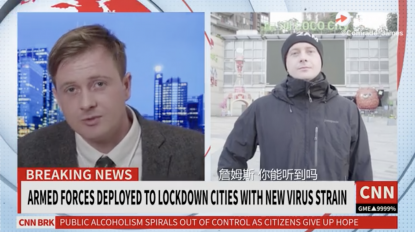 A screenshot of the Weibo video.

At the end of the video, "James" explains he wanted to “poke fun” at media outlets.