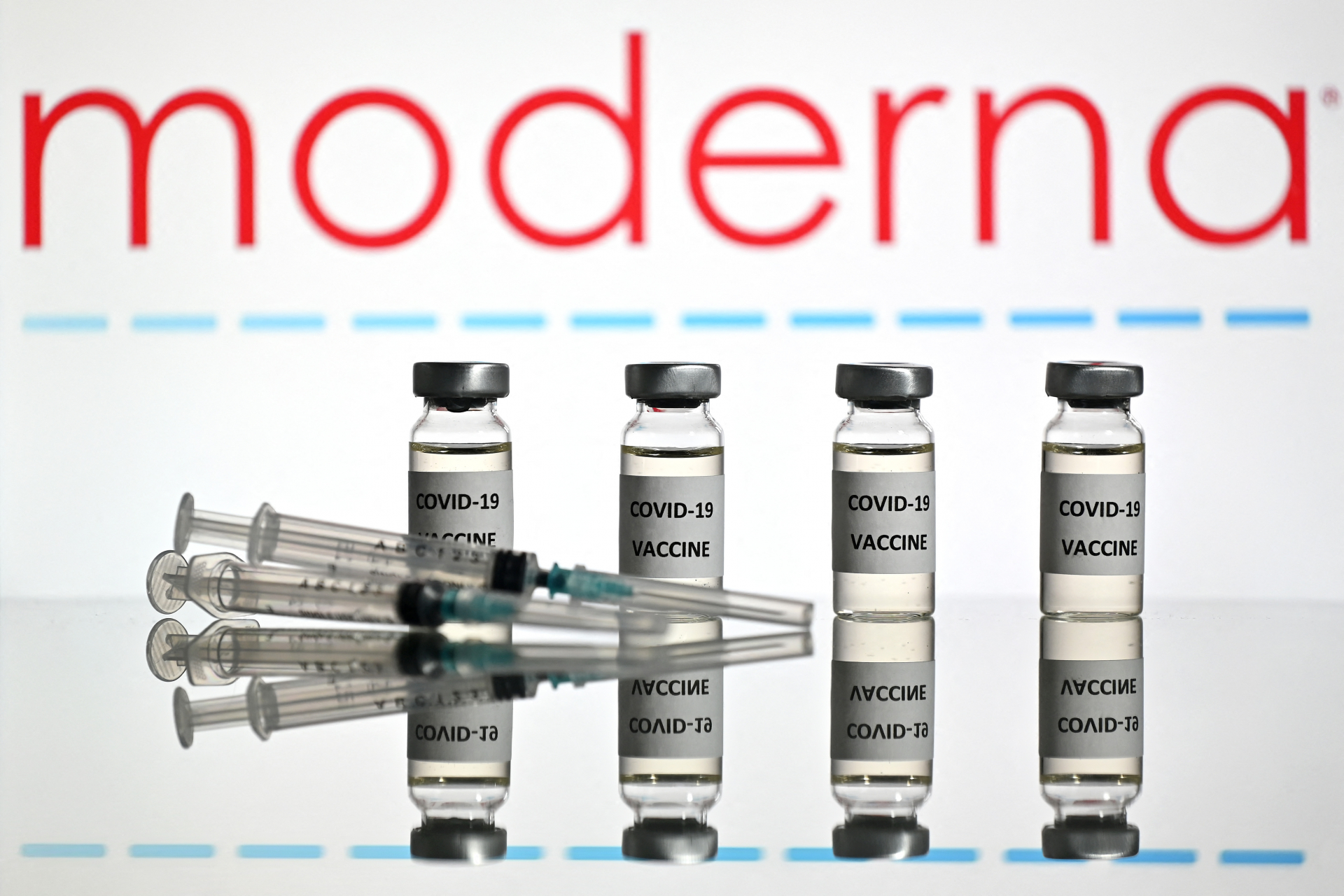 (FILES) In this file photo taken on November 17, 2020 An illustration picture shows vials with Covid-19 Vaccine stickers attached and syringes with the logo of US biotechnology company Moderna. - The European Union has bought up to 300 million extra Covid-19 vaccine doses from US firm Moderna, European Commission chief Ursula von der Leyen said on February 17. The new deal, which she hailed as good news, adds to the EU's vaccine stock as it strives to ramp up inoculations to meet a target of fully vaccinating 70 percent of adults by mid-September. (AFP / Justin Tallis)

Two photos have been published in a purported news report that claims they show people suffering from side effects caused by Moderna’s Covid-19 vaccine. The report has been shared in multiple posts on Facebook and Korean online forum Naver Blog. The claim is false: the photos have both circulated online in unrelated reports published before the coronavirus pandemic. The purported report shared in the social media posts was not published by a credible news outlet.

“The horrifying truth of the Moderna vaccine,” reads the Korean-language post. 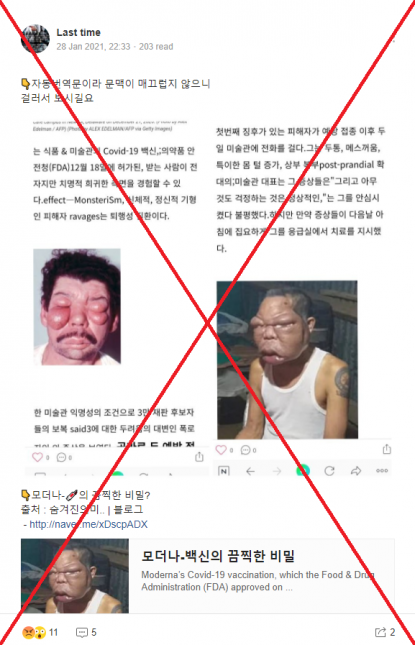 Screenshot of the misleading Naver Band post, captured on February 19, 2021.

The post linked to a report published by Real Raw News here on December 30, 2020.

The report is headlined: “Moderna Covid-19 Vaccine Causes ‘Monsterism’". It reads in part: “Moderna’s Covid-19 vaccination, which the Food & Drug Administration (FDA) approved on 18 December, may cause recipients to experience an extremely rare but potentially lethal side effect—Monsterism, a degenerative disease that ravages a victim with physical and mental deformities.”

The report, which includes the photos of two people with facial deformities, claims they suffered a side effect from the Moderna Covid-19 vaccine.

The report was also shared alongside a similar claim on Facebook here and on Naver Blog here and here.

Reverse image searches on Google found that the photos have circulated online before the coronavirus pandemic in reports unrelated to vaccines.

The first photo was published in 2007 in this study by the Department of Internal Medicine of Armed Forces Hospital in Brazil.

The photo’s caption reads: “Figure 1 - Conspicuous orofacial swelling, with intense enlargement and total closure of the eyelids. Telangiectasias and solar melanosis may also be observed.”

Below is a screenshot comparison of the photo in the misleading report (L) and the photo published in the 2007 study (R):

The second photo featured in the misleading report was taken from this report from MailOnline, the website for British tabloid The Daily Mail, published on July 17, 2019.

According to MailOnline, the man in the photo is 56-year-old Romulo Pilapil from the Philippines, who suffers from severe facial swelling.

The photo is credited to ViralPress. The caption reads: “Pilapil began to feel unwell three years ago when his eyes began watering and his nose started running, which was first diagnosed as sinus trouble (left before his illness, right now).”

Real Raw News is not a credible media site, according to Media Bias/Fact Check (MBFC), a US-based independent media outlet that reports on deceptive news practices.

It described the website as “far-right biased and Questionable based on the promotion of conspiracy theories and propaganda, poor sourcing, a complete lack of transparency, and the publication of fake news.

As of February 23, 2021, there have also been no credible reports or statements to support the claims made in the Real Raw News report.

The US Food and Drug Administration (FDA), which approved the Moderna Covid-19 vaccine in December 2020, stated here that the vaccine’s “most commonly reported side effects, which typically lasted several days, were pain at the injection site, tiredness, headache, muscle pain, chills, joint pain, swollen lymph nodes in the same arm as the injection, nausea and vomiting, and fever.”