Skip to main content
People arrive to attend the Celebration of Life memorial service for Nipsey Hussle on April 11, 2019 at the Staples Center in Los Angeles, California (Robyn Beck / AFP)

‘We do not make a box of crayons that contains a Nipsey Blue colored crayon’: Crayola

A post shared more than 44,000 times on Facebook claims Crayola has renamed a crayon after late rapper Nipsey Hussle, who was shot dead in front of his Los Angeles clothing store in March 2019. Social media users have campaigned for naming things in honor of  the rapper since his death, however Crayola told AFP they do not make a box of crayons including a color called ‘Nipsey Blue’.

The post, which we’ve archived here, has been shared more than 44,900 times on Facebook and shows the image of a blue crayon labelled NIPSEY BLUE linked to an article headlined: “Crayola Renames Crayon Color in Honor Of Late Rapper Nipsey Hussle!!!” Hussle, a Grammy-nominated rapper, was shot dead in the US city of Los Angeles on March 31, 2019 sparking an outpouring of grief from fellow celebrities as the city's mayor blamed "senseless gun violence" -- read this AFP report.

An internet search of “Nipsey Blue crayon” reveals numerous mainstream articles about fans asking Crayola to name a crayon after Hussle, however none confirmed a name change like the false post.

The requests are largely found as Twitter replies to a post informing users about Crayola’s competition in 2017 asking people to suggest names for its new blue colour.

Some of the fans and friends of Hussle who suggested Hussle related names on the Caryola tweet include basketball star LeBron James, and rapper Glasses Malone.

However according to Crayola, the image of a crayon labelled Nipsey Blue was created by a a guest at the Crayola Experience and not by the company as the misleading post suggests.

“The photo circulating on social media is a crayon that was made by a visitor at one of our Crayola Experience locations in the United States,” said a Crayola spokesperson via Facebook Messenger.

Crayola says the attraction allows a visitor to personalize and print an authentic Crayola crayon label, and then wrap it onto a crayon.

“We do not make a box of crayons that contains a Nipsey Blue colored crayon.”

The new colour was named “Bluetiful” in September 2017. 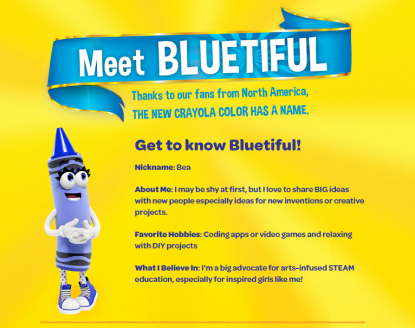 A screenshot taken on June 17, 2019 of crayon colour 'Bluetiful' on Crayola's website