Skip to main content
“Don’t schedule your drinking according to a fictitious claim that the time you drink it matters,” according to Dr. Marc Gillinov (AFP / Anne-Christine Poujoulat)

A Facebook post shared tens of thousands of times claims that drinking one glass of water before bed prevents heart attacks, and that individuals who take aspirin to prevent heart attacks should do so at night for better results. This advice is unproven. Drinking water is generally regarded as a good thing for health, though timing has not been shown to impact this practice’s effectiveness, according to health professionals. Chewing aspirin is recommended while having a heart attack, but should not be ingested daily by individuals with no pre-existing heart conditions, an expert told AFP.

Health related advice abounds on social media platforms, and tips to decrease chances of a heart attack are a major subcategory. A popular Facebook publication makes multiple claims regarding drinking water, taking aspirin and their impact on the risk of heart attacks. 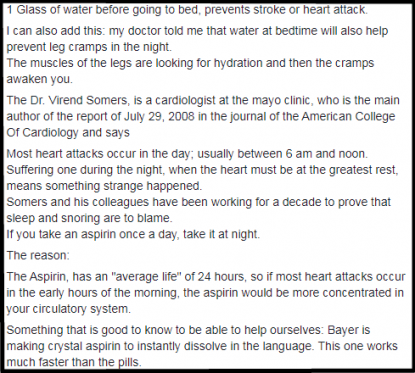 This advice, which circulated as an email chain prior to making its way to Facebook, has led a Canadian bottled water company and a US insurance company to advise their customers to drink water before bed.

The publication, and others like it, borrow the authority of a real person, Dr. Virend Somers of the Mayo Clinic, a US nonprofit health organization, in order to back up its claims.

Although Dr. Somers did contribute to a study published in the July 29, 2008 issue of the Journal of the American College of Cardiology, as the publication states, the study makes no mention of water or aspirin as key to preventing heart attacks.

Rather, the study focuses on patients with obstructive sleep apnea, a disorder that causes breathing to stop and start during sleep, and points to a possible correlation between myocardial infarctions at night, or heart attacks, and sleep apnea.

Upon realizing that one of their doctors’ names was being used to support this ‘advice’ in 2010, the Mayo clinic wrote in a statement, “Neither Dr. Somers nor Mayo Clinic contributed to this email, which contains some information that is inaccurate and potentially harmful.”

Dr. Marc Gilinov, a cardiovascular surgeon at the Cleveland Clinic, a hospital in the US state of Ohio, examined the claim that drinking water a specific times of the day has particular health benefits. He wrote in this debunk, “There is no data to suggest that ‘when’ you drink matters.” He advised choosing water over soda, and cautioned, “Don’t schedule your drinking according to a fictitious claim that the time you drink it matters.”

This large study of Californians published in 2002 found that high daily water intake (5 or more glasses) resulted in lower risk for fatal coronary heart disease than for people who had low daily water intake (2 or fewer glasses). The study did not record what time of day people were drinking the water.

Dr. Andrew Pipes, former chief of the cardiac prevention and rehabilitation division of the University of Ottawa Heart Institute, told AFP that there is no evidence to support the claim that one should take a daily dose of aspirin at night over another time of day. He explained that medicine’s effects take seven to ten days to dissipate, “So the theory is attractive but has no practical application in those who take aspirin on a daily basis.”

The posts also recommend a specific aspirin made by Bayer. When consulted on the superiority of different types of aspirins, Pipes said, “If someone is having a heart attack, we ask them to chew an aspirin of any kind, and that generally delivers the aspirin pretty rapidly,” adding, “I would not be recommending a specific brand of aspirin given the wide variety of aspirins available.”

While taking aspirin on a daily basis is often recommended for patients with present or past heart conditions, Pipes warned against it for anyone else. “The risk is greater than any benefits in those that do not have a heart disease,” he said.

An October 2019 study from the University of Alberta’s Faculty of Medicine corroborates this explanation, and insists patients with no cardiac history should not take aspirin daily.

No government agency or health organization advises individuals to first call neighbors for help in case of a heart attack, as the Facebook publications do. Calling 9-1-1 is the first step recommended by the Heart and Stroke Foundation of Canada when one is experiencing heart attack symptoms.

Health Canada, as well as the nonprofit Heart and Stroke Foundation, both recommend chewing aspirin when experiencing a heart attack, but only after calling 9-1-1.