Skip to main content
A father and a mother look at their newborn son on November 17, 2020 (AFP / Martin Bureau)

Misleading claims about the purported dangers of a vitamin K shot being given to babies are circulating across social media. But the injection of the essential vitamin, which aids in clotting, has been tested for safety, and is recommended by pediatricians in the United States and Canada as the best way to prevent potentially deadly bleeding in newborns and infants.

“Vitamin K deficiency is one of the most common causes of bleeding in healthy infants,” according to the American Academy of Pediatrics (AAP).

Since 1961, the AAP has recommended that all newborns receive a single dose of 0.5 to 1 mg of vitamin K via injection. The same dose has been recommended by the Canadian Paediatric Society and the College of Family Physicians of Canada since 1988.

The University of Michigan Mott Children’s Hospital estimated that if medical professionals in the US stopped giving intramuscular vitamin K at birth, “12,000 to 80,000 babies per year would develop vitamin K deficiency bleeding,” amounting to “more than 200 infants per day.”

This bleeding can cause brain damage or death. But misinformation about the shot persists online.

CLAIM 1: “Did you know? The Vitamin K shot is so dangerous that it is one of the few vaccines which has what is called a ‘black box warning.’” 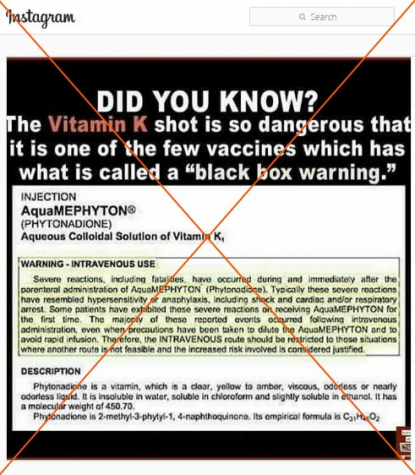 Instagram posts, including this one, liked more than 1,200 times since December 17, 2020, point to a warning found on the packaging for AquaMEPHYTON. The claim can also be found on Facebook.

But it is misleading.

The warning clearly states it applies to intravenous use, which is “not what we do in newborns at all,” explained Dr Amanda Loewy, a member of the Maternity and Newborn Care Program Committee of the College of Family Physicians of Canada.

Typically, within the first six hours of birth, a vitamin K shot will be injected under the skin into one of the baby’s thighs.

The same product used on the newborns may also be used on older patients for intravenous infusion, and the warning relates to severe allergic reactions observed in people who were given a large dose of vitamin K rapidly through an IV.

Dr Steven Abrams, professor of pediatrics at the Dell Medical School at the University of Texas at Austin, said via a Zoom call that receiving vitamin K in the “intramuscular form doesn’t pose the same types of risks” as when it is used intravenously.

A 2014 study from Turkey showed how rare an allergic reaction in newborns is, arguing it had identified “the first case of neonatal anaphylactic shock developing due to intramuscular administration of vitamin K1.”

Abrams said that even if there was a rare allergic reaction, it could be easily responded to and treated.

He further said that the posts made a mistake in “linking vitamin K to a vaccine.”

“They really are not the same thing. Vitamin K deficiency is not contagious,” he said.

CLAIM 2: “If you are expecting and haven’t considered oral vitamin k over the injection, please stop what you are doing and look into this.” 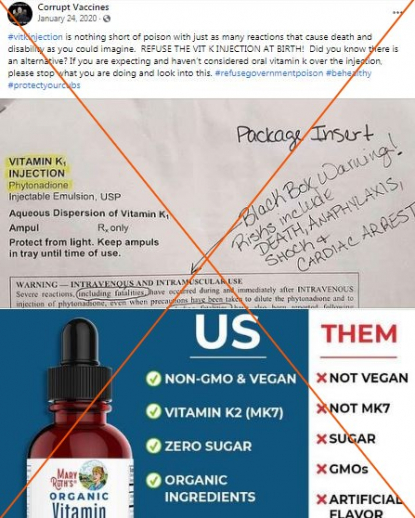 This claim is found on Facebook from a US-based page and includes an image of Vitamin K2 MK7 Liquid Drops.

Abrams, who also serves as the Chair of the AAP Committee on Nutrition, said: “There isn’t any oral vitamin K form for babies in the United States that’s approved.”

Other countries, including Canada, may offer three doses of oral vitamin K over a period of weeks if parents refuse the vitamin K injection, but Dr Brigitte Lemyre, associate professor in the department of pediatrics at the University of Ottawa, explained in an email that vitamin K injected under the skin gets “dispersed more readily and steadily than an oral dose.”

She also said that the risks increase with oral vitamin K because “people forget and don’t get their follow-up doses. Studies have shown more benefit (for late onset hemorrhagic disease of the newborn) with intramuscular vitamin K.”

Arguments that breast milk will pass sufficient vitamin K to a newborn were also dismissed by Abrams and Loewy.

Stanford Medicine’s Newborn Nursery found that infants most at risk for “Vitamin K deficiency bleeding” or VKDB “are healthy babies who are exclusively breastfed.”

CLAIM 3: “This shot is the cause of Jaundice in newborns!” 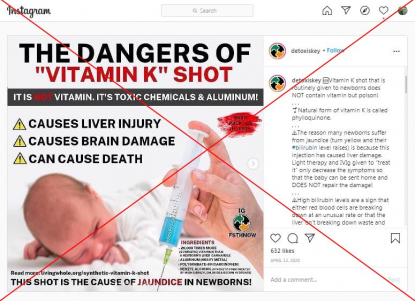 This post from Instagram attempts to link the vitamin K shot to incidences of jaundice in newborns.

The Mayo Clinic, a major American medical research center headquartered in the state of Minnesota, defines infant jaundice as “yellow discoloration of a newborn baby’s skin and eyes.” It said the condition occurs “because the baby’s blood contains an excess of bilirubin, a yellow pigment of red blood cells.”

Ottawa’s Lemyre said: “I have never read anything credible linking jaundice and vitamin K. Jaundice is caused by a more rapid breakdown of red cells, sometimes due to a blood group difference between mother and baby, sometimes high hemoglobin, sometimes, concealed bleeding (like hematoma), and many other causes.”

A Texas Children’s Hospital blog post dedicated to dispelling myths about the vitamin K injection says: “Jaundice associated with vitamin K has been observed only in high risk babies (such as premature babies) in doses 30-60 times higher than the dose we give.”

Written text posts on Facebook also claimed a link between the benzyl alcohol used as a preservative in the shot, and jaundice. But Michigan Medicine said: “You would need to give approximately 100 times higher amounts of benzyl alcohol on a daily basis in order to cause any side effects.”

Loewy, a practicing physician in Saskatoon, agreed. “The amounts that are in an injection like this has not been shown to be harmful.”

CLAIM 4: “The doctors know that your baby is meant to stay connected to the umbilical cord until all the blood and stem cells are transferred to your baby...but they clamp early because they are getting paid big $$$$$ by big pharma to take the cord blood...And substitute it with a dangerous so called vitamin K shot...that they claim is necessary to prevent brain bleed.” 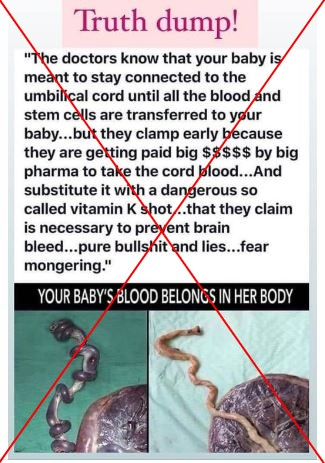 Facebook and Instagram posts claim that explaining the risk of a brain bleed due to vitamin K deficiency is “fear mongering” by doctors.

VKDB is rare in the US because most babies receive the vitamin K injection. But Michigan Medicine determined that two out of every 100 babies who skip the shot will develop VKDB, and according to the US Centers for Disease Control and Protection (CDC), “one out of every five babies with VKDB dies.”

Experts said that delayed cord clamping, which is increasingly a standard practice, is not directly related to the need for a vitamin K injection.

Canada’s Loewy also explained that while delaying cord clamping could give the baby “a little bit more hemoglobin, or red blood cells from the placenta,” it “does not give them additional vitamin K,” and the injection would still be warranted.

CLAIM 5: “A British study linking injections of the common painkiller pethidine during labour and vitamin K after birth with childhood cancer has sent shockwaves through the medical world.” 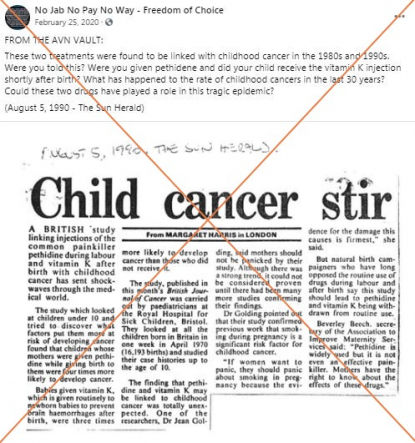 Facebook posts, including here and here, shared a newspaper clipping from an August 5, 1990 report on a study from a researcher in Bristol, England who claimed to find an association between intramuscular vitamin K at birth and an increased risk of childhood leukemia.

The UK researchers said: “We conclude that there is no convincing evidence that neonatal vitamin K administration, irrespective of the route by which it is given, influences the risk of children developing leukaemia or any other cancer.”

And the US researchers argued: “Unless other evidence supporting an association between vitamin K and cancer appears, there is no reason to abandon the routine administration of vitamin K to newborns.”

Lemyre said: “There is no biological plausibility for a link between vitamin K and cancer.”

She said parents can feel confident that there is not a link because “the studies performed showed an association (which is not causality), but failed to provide a reasonable biological explanation.”

Exposure to misinformation about the cancer connection led to dire consequences for families in Tennessee, including three children who suffered intracranial hemorrhage.

The Tennessee Department of Health and the CDC investigated the cluster of late VKBD cases and found that “concern about an increased risk for leukemia when vitamin K is administered” was cited by the parents when they were asked why they skipped the shot.

University of Texas’s Abrams said it is crucially important for parents to agree to give their newborns vitamin K.

Unlike a vaccine, which can be given later in life, he said: “You only get one chance at this one. Once a baby has brain bleeding you can’t reverse that. That’s for life.”

More of AFP Fact Check’s reporting on health misinformation can be found here.