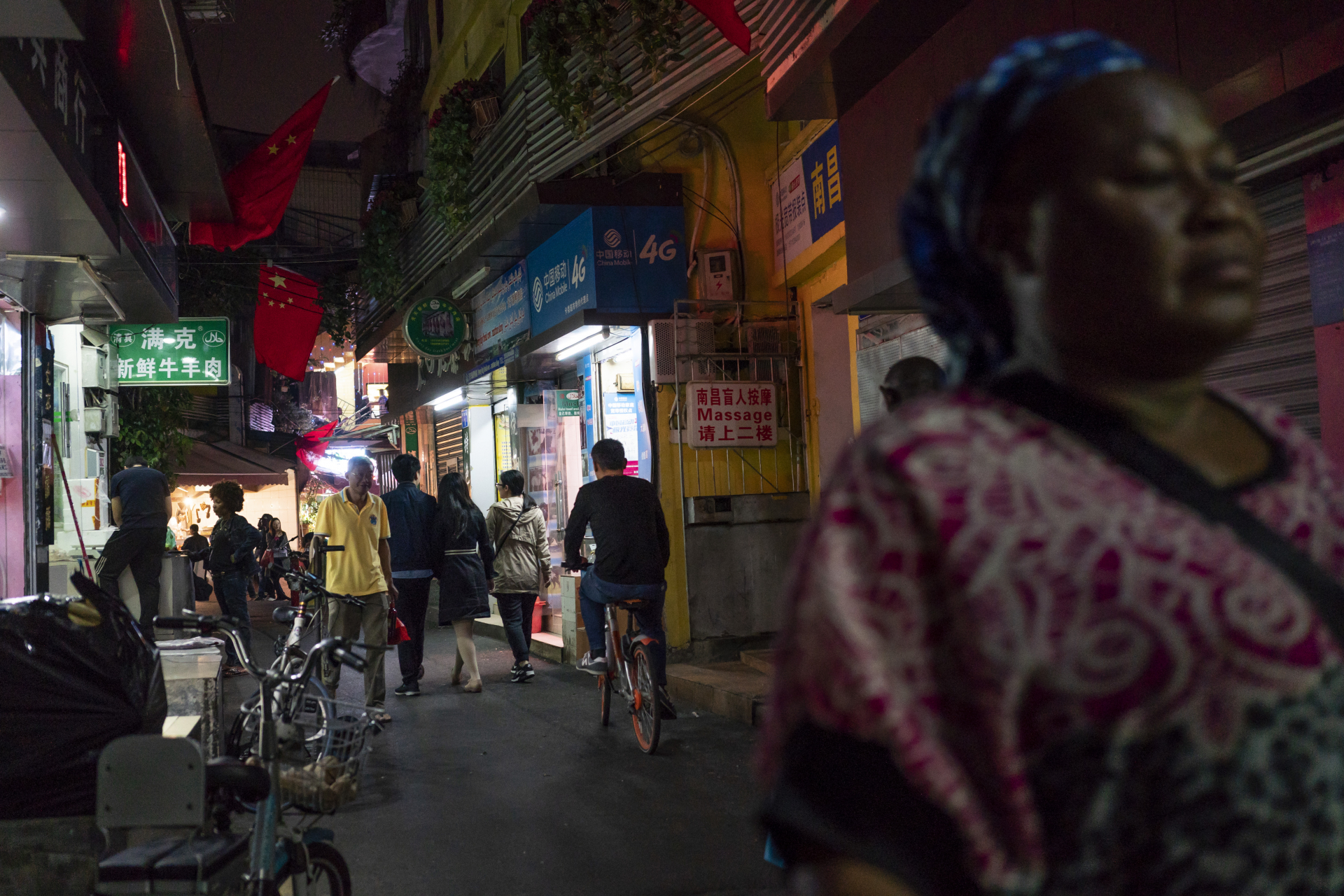 People in the Little Africa district of Guangzhou, China in 2018 (Fred Dufour / AFP)

Viral videos of Africans attacked in China were filmed years ago

Videos showing black people being attacked by Asian people have been shared thousands of times online in recent weeks. Although Africans living in China have reported discrimination linked to the coronavirus pandemic, AFP Fact Check found that various widely-shared clips were filmed years ago and have nothing to do with the virus.

“This is an African being violated, tortured and humiliated in China. What should we do with the Chinese on our lands?” reads a tweet shared more than 3,000 times since it was posted on April 19, 2020.

The accompanying footage shows a black man pushed to the ground, punched and kicked by a group of Asian men at a market. 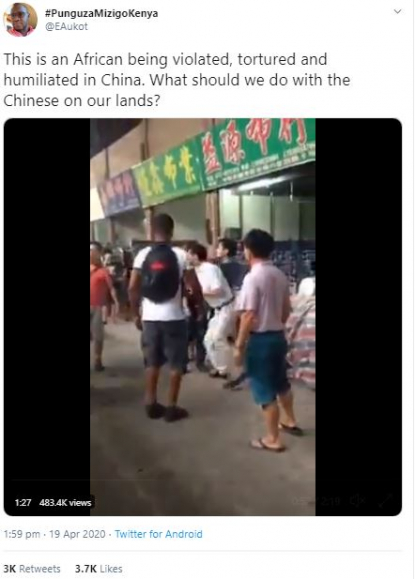 Screenshot of a video shared on Twitter, taken on April 23, 2020

As covered by AFP, Africans living in China have reported stigma and discrimination during the pandemic, including forced evictions, arbitrary quarantines and mass coronavirus testing, apparently linked to a cluster of cases in the Nigerian community in the southern city of Guangzhou.

McDonald’s apologised after a sign telling black people they were banned from entering a branch in the city prompted outrage online. 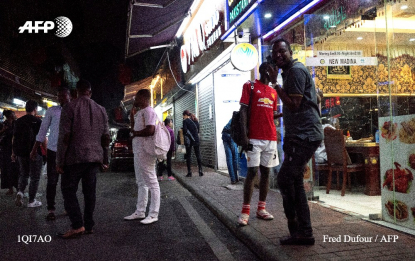 AFP Fact Check ran a reverse image search on the footage using the InVID WeVerify tool and found a longer version published in 2017. The victim can be heard speaking in the Nigerian language Igbo, identified by AFP Fact Check's Lagos-based journalist Mayowa Tijani.

Two minutes into the clip, the man shouts to bystanders: “How can you let these people do this to me?”

A Google search for the phrase “Nigerian man beaten by Chinese” revealed an article from Nigerian news site Vanguard featuring a video which is now unavailable.

“A Nigerian man is being beaten by some Chinesemen because … Ikechukwu Obih posted the video on Facebook in June 2015 (sic),” the article's only line of text reads.

‘Take a rope and tie him’

AFP Fact Check found Ikechukwu Obih’s Facebook profile as well as the video in a post from June 12, 2015, captioned “Chinese beating Nigerian in China”. AFP contacted Obih but has not yet received a reply.

“It’s no good calling the police, they won’t do anything. Take a rope and tie him,” one man says in Mandarin.

“He owes people money, for several years… owes more than 100,” another says in Cantonese.

Using Chinese mapping service Baidu Maps, AFP Fact Check traced the scene in the video to a shopping arcade in the city of Foshan in the southern Chinese province of Guangdong.

Another video circulating online shows a black man repeatedly struck with batons by a group of men speaking an Asian language. A text overlay on the footage reads “China against black’s (sic)”.

“We are now SLAVES OF CHINESE,” reads the caption on a Facebook post shared more than 800 times since it was published on April 16, 2020.

The video has also been circulating on Instagram (here and here) since mid-April. 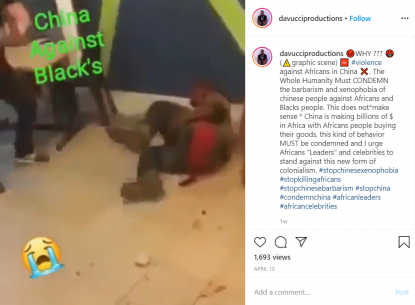 Screenshot of the video shared on Instagram, taken on April 24, 2020

AFP Fact Check ran a reverse image on the video and found an article on US site MTO News from September 2018 featuring the graphic clip.

The report claims that a young Zambian man studying in China was beaten to death by thugs “for dating a Chinese woman”. 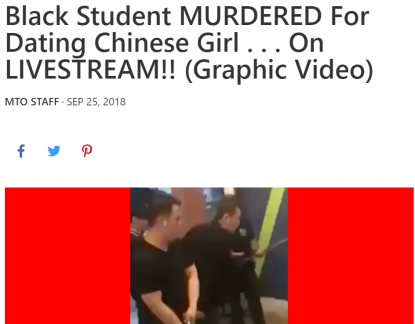 TurnBackHoax’s fact check claims the video shows a suspected thief being attacked in Malaysia, not a man beaten in China for dating a Chinese woman. It links to a 2016 article (warning: contains graphic images) on Malay news site World Of Buzz, which features screenshots of an extended version of the footage.

“Thief With Parang Beaten into a Bloody Mess After a Failed Robbery in Sarawak,” the headline reads. A parang is a type of knife and Sarawak is a Malaysian state on Borneo island.

“A recent post on Facebook by mandarin news page JBReport has gone viral after videos of a robber beaten to a bloody pulp surfaced on the internet (sic),” the article reads.

The Facebook post from August 1, 2016 features three different videos of the attack taken from different angles. It says the man attacked had stolen from a shop in Kuching, the capital of Malaysia’s Sarawak state.

“Taking justice into their own hands, the angry shop owners struck the robber with metal pipes,” World Of Buzz’s article claims. 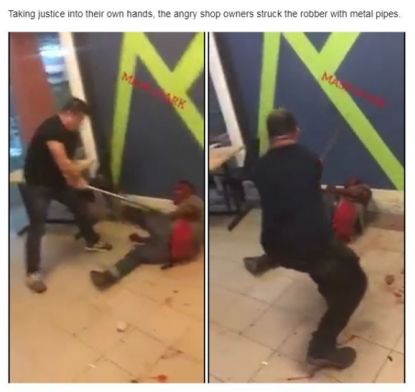 According to AFP Fact Check’s journalist Ching Yee Choo, who covers Malaysia and Singapore, the group attacking the man are speaking Malay and a southeast Asian dialect, Hokkien. She picked out the words “robbery” and “cheat”.

“You good at thieving, eh?” one of the men asks.

Local newspaper The Borneo Post reported (in Malay) on the attack in an article from August 2, 2016, which gives a different version of events.

According to the report which quotes local police, the 44-year-old man was in a games arcade with a friend when five men ran in, took him outside and attacked him. The men stole his mobile phone and cash and vandalised his car, the article says.

“The five suspects accused the men of stealing,” the Sarawak police chief is quoted as saying.

On a Facebook page called “Sarawak Viral”, AFP found a post from August 2, 2016 describing the attack. The post features a photo of a car with smashed windows parked against a wall with the same yellow and black pattern as the footage showing the man being assaulted.

Screenshot of a Facebook post (left) and of the video showing the attack (right), taken on April 24, 2020

AFP Fact Check has previously debunked a video purporting to show Kenyan and Chinese people fighting in Wuhan, the Chinese metropolis at the epicentre of the outbreak.