Viral video does not show Bobi Wine’s wife, son being harassed by Ugandan police ahead of election

A video has been shared thousands of times on social media alongside claims that it shows Ugandan police manhandling and stripping the wife of opposition leader Bobi Wine and her son. But this is false: Barbie Wine told AFP Fact Check that she was not the person in the clip. Further investigation of the video also showed that the women were not identical.

The video, shared more than 1,400 times here on Facebook, has been seen hundreds of thousands of times across multiple social media platforms including on Twitter and YouTube.

“What is happening in Uganda is extremely sad. This is what they did to Bobi Wine's wife and son. Weep Mama Africa!,” the Facebook post reads. 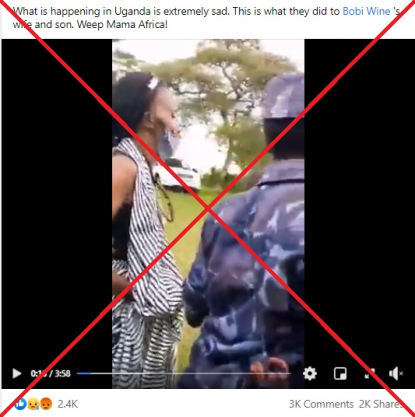 A screenshot taken on January 20, 2021, showing the false post

A Twitter post, which has been retweeted over 11,000 times, alleges the video shows “Bobi Wine's wife tortured, stripped and arrested in full glare of the son who's heard shouting, ‘leave my mummy’”.

“At one point, the woman was seen struggling with the police officers before she stripped to her underwear in front of her son after being pushed to the floor,” the article said.

The claim emerged as political tensions ran high in Uganda ahead of the presidential election on January 14, 2021.

However, Museveni beat his adversary and returned to power for a sixth term in a poll marred by deadly violence and a government-imposed internet blackout, as AFP reported here. Wine, who was placed under house arrest after casting his ballot, has accused the election of being rigged.

Ahead of the election, the misleading video was shared thousands of times on Twitter with the hashtag #WeAreRemovingADictator.

Barbie Wine confirmed that she was not the woman seen in the clip.

"I was shocked by the video. That's not me. It is another person," she told AFP Fact Check on January 19, 2021, after the internet was restored in Uganda.

"As a woman activist and a human rights defender, and mother, it is horrific that in today's Uganda, women are still brutalised by [the] government that is supposed to protect them against harm," she said.

The image quality of the video was too low to allow for a clear side-by-side identification.

However, AFP Fact Check found disparities in the accents of the woman in the clip and Barbie Wine.

There are also differences in their physical appearances. While Wine sports a low afro cut, the woman in the video had twisted braids.

Local AFP journalists in Uganda who have met Barbie Wine confirmed she was not the person seen in the clip.

While AFP Fact Check has not been able to establish the identity of the woman, this Facebook post described the woman as a jilted lover.

Our investigation revealed the existence of a longer version of the clip.

An AFP Fact Check translation of the exchange between the woman and police officers, conducted in Nyankore, indicated that she was being blocked from attending a social event.