A meme shared thousands of times claims a recently republished novel by UK PM Boris Johson’s father, Stanley Johnson, is about “a government releasing a deadly virus into the population as cover for population control through a forced vaccine”. The claims are misleading; the book actually details the efforts of a fictional globe-trotting American epidemiologist who stops a pandemic. The book does not mention population control or a mandatory vaccine.

The claims were published by an Australian-administered Facebook page here on October 14. The post has been shared more than 200 times. 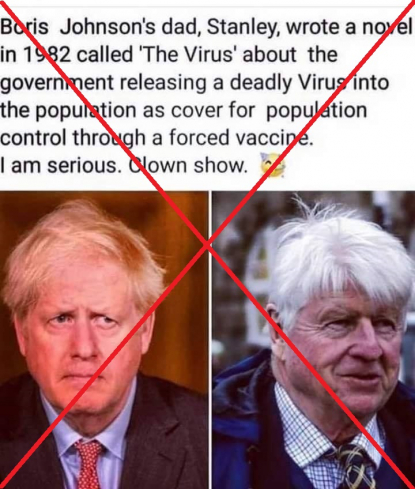 Text written above a photo of UK PM Boris Johnson (right) and his father (left) reads, in part: “Boris Johnson’s dad, Stanley, wrote a novel in 1982 called ‘The Virus’ about the government releasing a deadly Virus into the population as cover for population control through a forced vaccine.”

The claims were also shared hundreds of times on Facebook, for example here, here, here and here.

Stanley Johnson, the father of the current UK PM, Boris Johnson, did publish a book called “The Marburg Virus” in 1982, which was republished by HarperCollins owned imprint Witness Impulse this year.

Contrary to the claims made in the Facebook post, after reading the entire novel AFP Fact check found no references to “the government releasing a deadly virus into the population as a cover for population control”.

The book revolves around a fictional epidemiologist, Lowell Kaplan, who attempts to track down the source of an outbreak of the highly infectious and deadly Marburg Virus, after a woman dies from the pathogen in New York.

Set around the time of its original publication in 1982 the book uses the Cold War tensions of the time as the driving force behind the narrative, pitting the US and USSR against each other in a race to control the main vector of the virus -- a group of African Green Monkeys.

As Kaplan searches for the source, the outbreak worsens in the United States, resulting in "fifty thousand suspected contacts in isolation".

In the book’s denouement, Kaplan and another character called  Stephanie Verusio, manage to secure documents on how to create a vaccine.

The novel, however, stops short of detailing whether the vaccination program rolled out in the US is mandatory, as claimed in the Facebook post, with a character only later alluding to 200 million Americans receiving a dose.

There is no mention of the virus being “released into the population” for population control, which refers to artificially controlling the size of a population, as claimed in the Facebook post.

Population control is also not mentioned as a motive behind controlling the virus, also claimed in the Facebook post.

At the end of the book it comes to light that the fictional US outbreak of the virus was an accident.

The book is loosely based on the real outbreak of the Marburg Virus in Germany and Serbia in 1967. The original outbreak was linked to laboratory work using African Green Monkeys, according to the World Health Organization.