Skip to main content
Residents help a pickup driver get out of ice on the road in Round Rock, Texas, on February 17, 2021, after a winter storm. (AFP / Suzanne Cordeiro)

Multiple videos have circulated on Facebook, Twitter, YouTube and TikTok alongside claims that they show "fake snow" in the US state of Texas that blackens and does not melt when near a flame. The claim is false: scientists say that snowballs first absorb water when heated before eventually melting and that the appearance of soot on snow that is heated with fire is natural.

The one-minute, 40-second video shows a woman holding a snowball over a lit candle, which causes part of the snowball to blacken.

Haarp refers to the High-frequency Active Auroral Research Program, which studies the properties and behavior of the ionosphere.

Chemtrail refers to the chemtrails conspiracy theory, which alleges that governments or other parties secretly add toxic chemicals to the atmosphere from aircraft.

The post circulated after a snowstorm in February 2021 in Texas brought record-low temperatures, causing millions of people to go without water and electricity for days, as AFP reported here.

The fake snow claim also circulates in other videos showing people attempting to melt snow with candles or lighters on Facebook here, on Twitter here, on YouTube here and on TikTok here.

The claim, however, is false, according to experts.

Julienne Stroeve, a senior research scientist at the US National Snow & Ice Data Center, told AFP via email on February 25, 2021: “When you apply heat to the snowball, the snowball will first start to absorb that water in the porous spaces and you can always feel that as the snowball gets harder before it melts, and it makes sense to me that the soot from the lighter could darken the snow slightly.”

Stroeve also directed AFP to this video posted by scientist and blogger Philip Plait on February 3, 2014, in which he debunked a similar conspiracy theory that circulated on social media after a snowstorm paralysed the US city of Atlanta in late January 2014.

“The snow itself is absorbing water and becoming slushy,” Plait says in the video. “But what’s going on with the burn marks? … When you hold the lighter up to the snow, it is not that the snow is scorching. It is the incomplete combustion products, this pollution, this soot is basically coming out of the flame itself and plating itself onto the snow ball.”

Scientists from the Imagination Station Toledo museum in the US state of Ohio also conducted the snow heating experiment and debunked the false claim in this YouTube video published on February 1, 2014. 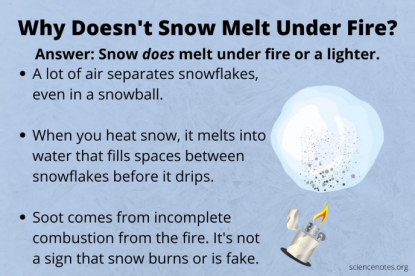