A video has been shared in multiple Facebook and Twitter posts that claim it shows a political rally in the Indian state of West Bengal, where attendees purportedly chanted a pro-Pakistan message. The claim is false: the video was not filmed in West Bengal but in Uttar Pradesh and the crowd was chanting the name of a local leader who won a village election.

“Current state of west bengal after elections where people are shouting, pakistan zindabad,” reads the caption to this video posted on Facebook on May 26, 2021.

“Pakistan zindabad” is a Hindi-language phrase that translates as “long live Pakistan”. 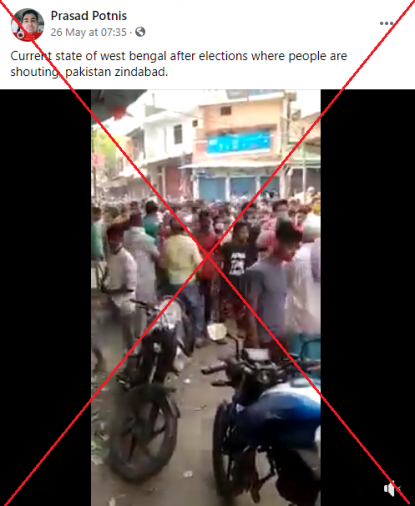 The post circulated online weeks after state polls concluded in the eastern Indian state of West Bengal. The country's ruling Bharatiya Janata Party (BJP) lost the poll, despite campaigning heavily in the state as it sought to end a decade of rule by firebrand leader Mamata Banerjee.

An identical video was also shared alongside a similar claim here and here on Facebook; and here on Twitter.

The video was not filmed in West Bengal.

At the video’s 53-second mark, a building can be seen with a Hindi-language signboard reading “Bhumi Vastralaya”.

Keyword searches on Google Maps found an establishment with an identical signboard geotagged here in the Bahraich district in the north Indian state of Uttar Pradesh.

Below is a screenshot comparison of the video in the misleading posts (L) and the image geotagged on Google Maps (R) showing the same signboard:

Furthermore, the video does not show rally attendees chanting a pro-Pakistan message.

A Hindi-speaking AFP journalist analysed the video and confirmed the chant heard is “Haji Sahab zindabad” -- not “Pakistan zindabad” as the misleading posts allege.

The chant refers to Haji Abdul Kalim who won the council election on May 4, 2021, in the Kewalpur village in Bahraich district of Uttar Pradesh, as reported here by Amar Ujala newspaper.

Kalim said the video had been shared in a misleading context.

“Our supporters were shouting my name while taking out a victory procession and not Pakistan,” Kalim told AFP on June 10, 2021.

The Bahraich Police also issued a statement here on Twitter on May 6, 2021, denying claims that a pro-Pakistan message was chanted during the event.

“The slogans raised in the victory procession of the newly elected head in Rupaidiha police station area were misleadingly circulated in WhatsApp groups,” the statement reads.

“The supporters shouted slogans in the victory of their leader and not of Pakistan.”