Emmanuel Macron was not slapped for disregarding Covid-19 sanitary protocols

Posts circulating in several African countries claim that French president Emmanuel Macron was slapped across the face for not respecting social distancing and other restrictions in place to reduce the spread of Covid-19. According to the social media posts, Damien Tarel, the man who slapped France’s leader, was given only a three-month prison sentence and a fine of 1,500 euros because Macron broke social distancing protocols. This is false. Although Tarel slapped the French president, it was not because Macron violated social distancing protocols, and Tarel’s lawyer did not present any such argument in court. Furthermore, the man was handed an 18-month prison sentence, 14 of which were suspended.

Tarel slapped Macron across the face when the French president went to shake hands with potential voters in the town of Tain-l'Hermitage in southeast France on June 8, 2021, as AFP reported here.

The Facebook posts, featuring screenshots of the video of Macron being slapped, allege that Tarel reacted because Macron broke social distancing protocols. According to the caption on one of the posts, Macron violated two rules: “The Handshake prohibited during the Covid-19 pandemic” and “Macron didn't respect the safety distance of 1 meter”.

The caption goes on to allege that Macron’s actions led to a reduced prison sentence for Tarel: “This got the respondent just a 3 month suspended prison sentence and fine of 1,500 Euros ( 1 Million Francs CFA) for assualt and battery.hese two relevant arguments were used by the defense lawyer to free his client (sic)”.

Another Facebook post, shared more than 55 times since publication on June 12, 2021,  features a profile photo of Macron with what appears to be a handprint on his face and a similar claim that the French president was slapped for disobeying Covid-19 sanitary protocols. 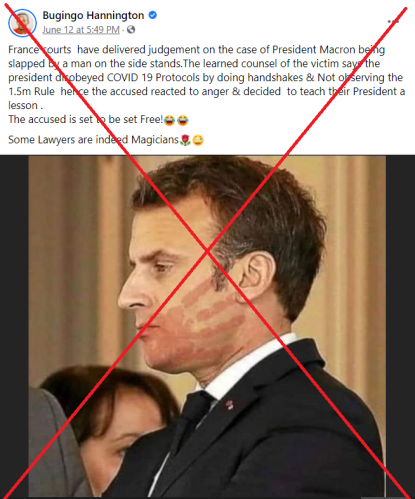 This claim adds that Tarel was "set free" because Macron did not respect social distancing.

"the accused reacted to anger & decided to teach their President a lesson. The accused is set to be set Free! (sic)," part of the post's caption reads.

Tarel was not given a three-month suspended prison sentence, as suggested in the posts on social media. He received an 18-month sentence, 14 of which are suspended, and a detention order was issued against him at the prosecutor's request.

During his hearing, which AFP covered, Tarel confessed to slapping the French president, but not because Macron violated social distancing rules.

When asked about his motives, Tarel told the court he “acted instinctively and without thinking".

Tarel said that he felt connected to France’s yellow vests movement, which held anti-Macron protests in 2018 and 2019, and that he identified with the political right in France. He subscribes to several far-right websites. 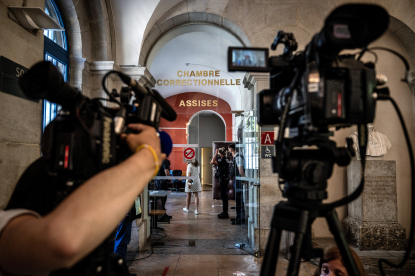 When Tarel slapped Macron, he cried out “Montjoie Saint-Denis”, a medieval battle cry associated with fringe right-wingers who want France to return to being a monarchy.

"It is also a patriotic slogan,” he said during the trial.

Tarel added that he is a fan of medieval history.

However, he never mentioned the Covid-19 crisis or Macron violating social distancing measures, as the social media posts falsely claim.

The only time that sanitary protocols were mentioned during the trial was when Tarel’s lawyer, Elodie Guellier, expressed annoyance that the court was packed with press and the public.

Leaders across the political spectrum condemned the slap. Macron dismissed it as an “isolated event” and said he would not pursue legal action himself.