This video was filmed in China’s Yancheng city, over 1000 km from China-North Korea border

A video has been viewed tens of thousands of times in multiple posts on YouTube and Twitter alongside a claim that it shows a sighting of military vehicles in a northeastern Chinese city at the China-North Korea border in late April 2020. The posts were published following speculation about the health of North Korean leader Kim Jong Un. The claim is false; the video shows armoured vehicles on the streets of Yancheng, a Chinese city some 1000 km southwest of the country's border with North Korea.

The 54-second video purports to show several military vehicles travelling along a street.

The simplified Chinese-language text superimposed on the left-hand side of the footage translates to English as: “Truth is life”; “Military vehicles on Dandong streets / Crisis at the China-North Korea border”.

The caption alongside the video translates to English as: “[Citizen journalist] Breaking news! Crisis at the China-North Korea border! Military and missile vehicles on the streets of Dandong~”

Dandong is a city located in the Chinese province of Liaoning, at the border with North Korea.

Below is a screenshot of the misleading YouTube video: 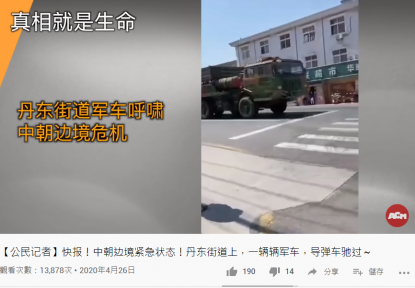 The video was also shared on Twitter here, here and here, with a similar claim in both Chinese and French.

The claim circulated online in late April 2020 after speculation over Kim Jong Un's health. The reports were sparked by observations that the North Korean leader was noticeably missing from state media coverage of the 88th anniversary of the founding of the country's armed forces, the Korean People's Revolutionary Army. Here is an AFP report about the developments published on April 27.

The video was filmed in China’s Yancheng city, Jiangsu province, more than 1000 kilometres southwest of Dandong, according to Google Maps here.

A supermarket with a blue signage seen at the five-second mark of the misleading YouTube video can be found here on Baidu Maps imagery of Yancheng.

Below is a screenshot comparison of the supermarket from the YouTube video’s five-second mark (L) and Baidu Maps (R):

Another signage for a supermarket and restaurant at the YouTube video’s 28-second mark is visible here also in Yancheng on Baidu Maps.

Below is a screenshot comparison of the supermarket seen at the YouTube video’s 28-second mark (L) and from Baidu Maps (R):

The misleading claim has been debunked such as here on Twitter by data journalist Min Chao Choy.