A video that appears to show a failed vaccination attempt has been viewed tens of thousands of times on Facebook, Twitter and Weibo. The clip was shared alongside a claim that it was filmed in India as Covid-19 cases surged. But the video has been shared in a misleading context: it was filmed in Mexico and shows a vaccination error. The man in the video has since received a Covid-19 vaccine, according to the government.

The post's Chinese-language caption translates to English as: “No wonder India’s Covid-19 pandemic is so serious.” 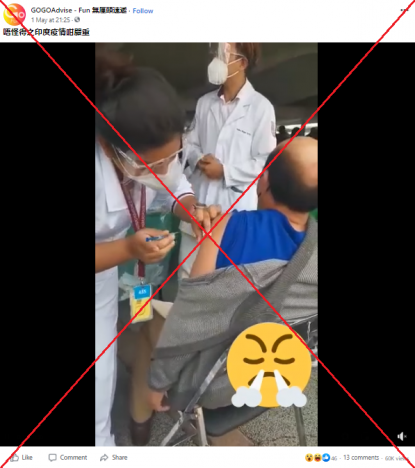 The 30-second video appears to show a health worker failing to give a vaccine dose to an elderly man. The clip shows her pricking his arm with a syringe then removing it without administering the dose.

The post circulated online as India faced a record surge in Covid-19 infections and deaths.

The country has been leading the fight to allow more drugmakers to manufacture vaccines that protect against the disease, AFP reported.

An identical video was also shared alongside a similar claim here on Facebook; here on Twitter; and here on the Chinese social media Weibo.

But the video has been shared in a misleading context: it shows an incident in Mexico.

Keyword searches found the same video was posted here on Twitter on April 3, 2021.

Its Spanish-language caption states in part: “This is my uncle. The nurse made him believe he was vaccinated but he was only pricked with the syringe but there was no liquid inside. This happened at the @IPN_MX in Zacatenco. Health workers should not be doing this.”

The Mexican Institute of Social Security confirmed the incident happened at the Instituto Politecnico Nacional, a public university in the country, in a statement posted on Twitter on April 3, 2021.

The institute said the incident was a mistake and the man shown in the video was eventually vaccinated.

The university also issued a separate statement here on Twitter. It said the vaccination error was made by a student volunteer and had already been remedied.

A visual inspection of the video shows the volunteer was wearing a badge holder that reads: “Instituto Politecnico Nacional”. 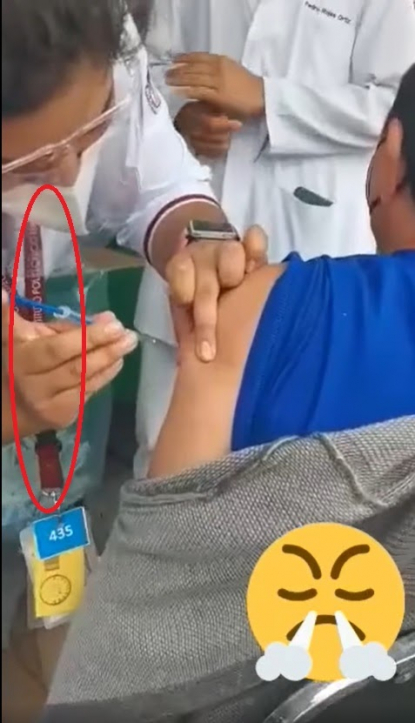 Screenshot taken on May 6, 2021 with the detail circled

The misleading claim was also debunked here by the fact-checking organisation Maldita.es.