This video shows a tsunami in Japan in 2011

Footage has been viewed hundreds of thousands of times on Facebook, YouTube and TikTok alongside a claim that it shows flash floods in Indonesia's Sukabumi regency. The claim is false; the footage has circulated online since 2011 in a video about a tsunami hitting the city of Natori in Japan’s Miyagi prefecture in March that year.

The Indonesian-language post translates to English as: “Sukabumi in Curug region hit by flash floods…” 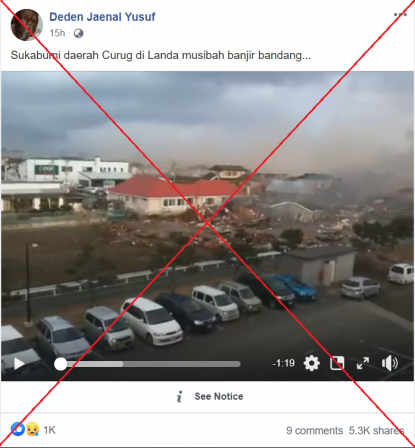 Flash floods struck Cicurug and Parungkuda districts in Sukabumi regency in the province of West Java on September 21, 2020, after heavy rainfalls caused the Cibuntu River to overflow, as reported by local media Liputan6.com here.

The video has also been viewed more than 157,000 times since it was shared alongside a similar claim on Facebook here, here, here and here; on YouTube here; and on TikTok here.

The same video was also shared with a claim that it occurred in Bogor, a city in West Java, on Facebook here, where it received 71,000 views.

Reverse image and keyword searches on Google found the same video was uploaded on YouTube here on August 8, 2011.

The caption reads: “This is a photo taken by a friend and I uploaded what my friend filmed with his/her permission. This is a video of the tsunami that hit Yuriage, Natori City, Miyagi prefecture. I hope various people can see the truth at that time.”

Yuriage, an area in the city of Natori, suffered devastating damage after a tsunami struck Japan’s Tohoku region on March 11, 2011, as reported by Fuji News Network and BBC.

The location of the Yuriage school building can be seen on Google Maps here.