This video shows a total solar eclipse in Chile in 2019, not the recent conjunction between Jupiter and Saturn

A video showing people on a beach looking up at a light in the sky has been shared on social networks alongside claims it captured the recent conjunction between Jupiter and Saturn, a planetary alignment dubbed by some as the “Star of Bethlehem”. But these claims are false; the footage was taken in 2019 and shows a total solar eclipse that was seen in Chile and elsewhere in South America.

“Star of Bethlehem viewed live” reads the caption in this Facebook post, shared more than 900 times since December 21, 2020.

In a short video included in the post, people can be seen gathered on a beach looking up at a point of light in the heavens. A few seconds later the sky darkens, and the crowd cheers. 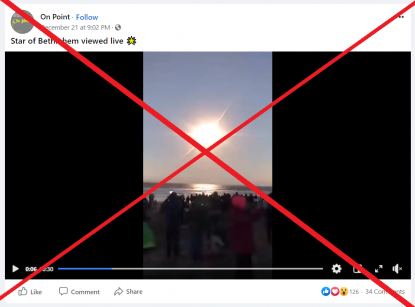 The same claims were made in Spanish here and here.

However, the claims that the video showed a recent celestial event described by many as the biblical Star of Bethlehem are false.

A reverse image search of a keyframe from the video allowed us to find the original footage, uploaded to YouTube on July 3, 2019 and that, as of December 30, 2020, had racked up more than 12,500 views.

This video and similar ones on YouTube (here, here and here) were, in fact, all filmed on the northern beach of La Serena in Chile during the total solar eclipse that could be seen in various South American countries on July 2, 2019. 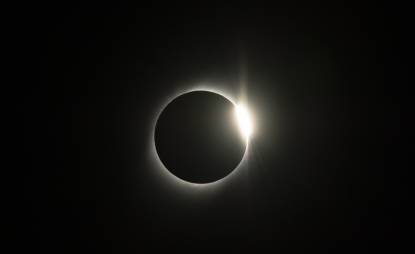 The planetarium in Argentina’s capital city of Buenos Aires, known as the Galileo Galilei Planetarium, describes a total solar eclipse as “the greatest spectacle in astronomy”. It is a rare event in which the moon moves between the Earth and the sun, causing the sky to darken in the daytime.

Another total solar eclipse occured in Chile and Argentina on December 12, 2020. The next one will be on December 5, 2048.

On December 21, 2020, Jupiter and Saturn came within touching distance of each other – in astronomical terms, at least – and appeared to the naked eye as a single, bright light in the evening sky. 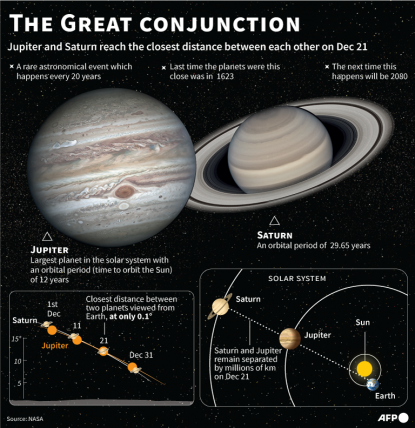 AFP graphic explaining the great conjunction of Jupiter and Saturn

Many labelled this planetary alignment the “Star of Bethlehem”.

But, according to The National Aeronautics and Space Administration (NASA), this phenomenon is known as a “great conjunction” and it occurs every 20 years, when the orbits of Jupiter, Saturn, and the Earth align.

This year’s event was remarkable for the fact that the last time the two planets came so close to each other was in 1623, although in 1226 the event was thought to have been more easily observed.

Armando Arellano, a doctor in astronomy and a researcher at the Institute of Astronomy of the National Autonomous University of Mexico (UNAM), explained that the conjunction is the proximity of the planets “in the plane of the sky”, but it is not a physical proximity as it might appear to us on Earth.

Even at their closest point this year, the two planets were still 730 million kilometres apart, as AFP reported. 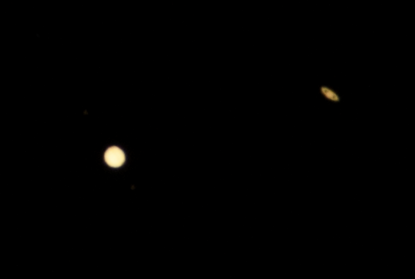 Jupiter (left) and Saturn during the grand conjunction from the Griffith Observatory on December 21, 2020 in Los Angeles, California. (Patrick T. Fallon / AFP)

Astronomer Daniel Flores, a teacher in physics at UNAM and also a member of the Institute of Astronomy, told AFP Fact Check that “it is an event related to the apparent movement of the planets” and stressed the fact that a conjunction is visible depending on “the projection of the light that comes from the planets and that seem to be together in a point of the celestial vault”.

The Star of Bethlehem?

In the Christian tradition, the so-called “Star of Bethlehem” guided the “three wise men” Melchior, Gaspar and Baltazar, towards Mary, Joseph and the newborn Jesus.

Several viral posts claim that the conjunction between Jupiter and Saturn forms “the Star of Bethlehem”. This theory was first proposed by the German mathematician and astronomer Johannes Kepler in the 17th century.

Other theories have referred to it as a comet or even a supernova.

Dr. Patrick Hartigan, a professor of physics and astronomy at Rice University, offered a possible explanation for the connection to the birth of Jesus: "Perhaps because this event occurs around Christmas, a lot of people seem to be talking about this conjunction as being the famous Star of Bethlehem (...) there is an obvious danger in that if you look for unusual celestial events in a given time interval you are going to find them.”

Furthermore, conjunctions “in general don't suddenly appear like a brilliant 'star'. They look like two planets close together”, he wrote. However, "if the planets are unresolved, it'll look like the brightest of the two usually, because there is almost always a large difference in brightness between the brighter one and the fainter one."