A video has been viewed tens of thousands of times in multiple posts on Twitter and Facebook alongside a claim it shows fires on the West Coast of the United States on September 26, 2020. The claim is false; the video was created from three separate clips that have all circulated online in reports before September 26, 2020 about other US fires. 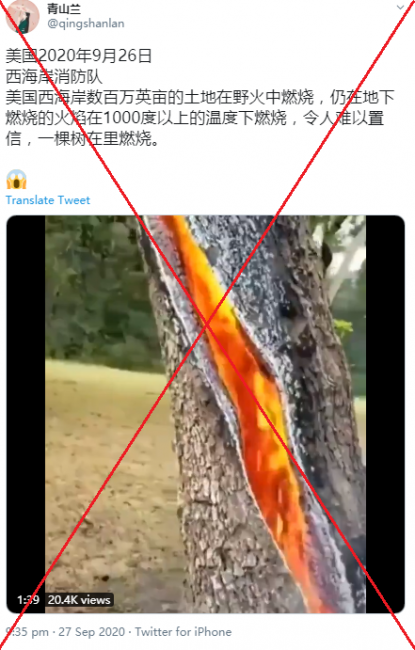 The one-minute 51-second long video includes three pieces of footage that show fire burning inside trees and in an underground crevasse.

The post’s simplified Chinese-language caption translates to English as: “United States September 26, 2020
"West Coast Fire Brigade
"Millions of acres of land on the West Coast of the United States burned in wildfires.

"The flames were still burning underground at a temperature above 1,000 degrees, which is unbelievable. It was burning inside a tree.”

A keyword search found the first piece of footage, which shows a fire inside a tree trunk, was published here by US weekly magazine Newsweek on October 22, 2019, nearly one year before the date claimed in the misleading posts.

The footage embedded in the article corresponds with the first 15 seconds of the video in the misleading posts.

A look inside a tree that has been struck by lightning. pic.twitter.com/IGcgu00fYm

Below is a screenshot comparison of the footage in the misleading tweet (L) and the video embedded in Newsweek’s article (R): 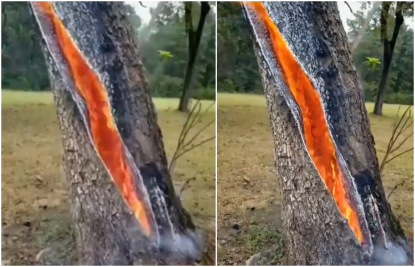 A reverse image search with video keyframes extracted from the second piece of footage also found that it predates the misleading posts. The footage was published here by television news station KPTV, based in the US state of Oregon, on September 22, 2020.

The video package is headlined: “'You do not want to fall into this': Firefighter shares video of fire underground in Detroit”.

Footage from the KPTV video corresponds with the misleading Twitter video’s 15-second mark to the one-minute 36-second mark.

Below are screenshot comparisons of the misleading Twitter video (L) and the KPTV video (R): 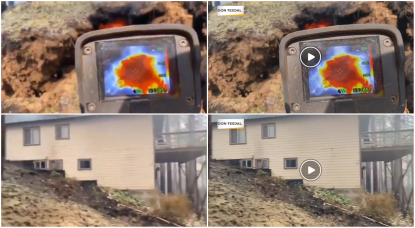 Another reverse image search with video keyframes found the third piece of footage was published on YouTube here on August 19, 2020, more than one month before the date claimed in the misleading posts.

The video’s title reads: “Fire Burning Inside of a Tree with Nothing Else Burning”. 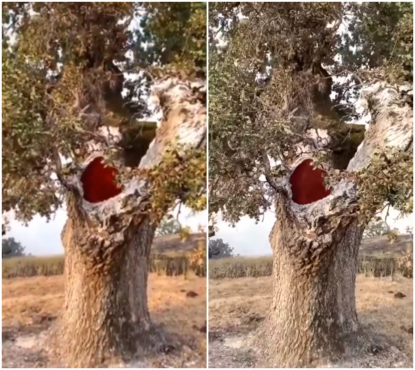