This video shows a ship sinking off the coast of Malaysia

A video has been viewed tens of thousands of times in multiple posts on Facebook, Twitter and YouTube alongside a claim it shows a ship sinking in Singapore in May 2020. The claim is false; the video actually shows a shipwreck off the coast of Malaysia in December 2018.

The one-minute 57-second video shows people jumping from a ship into the sea as it begins to capsize. 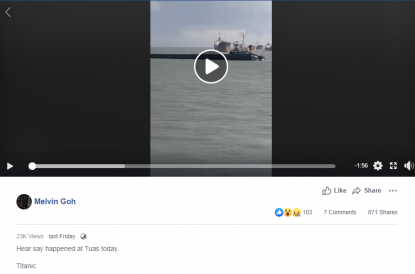 Tuas is an area in the southwestern region of Singapore. 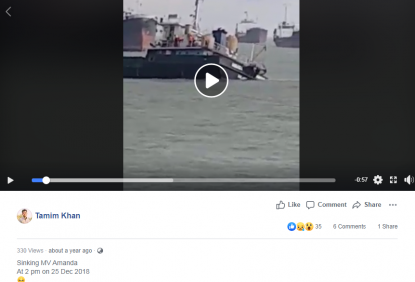 The Maritime and Port Authority of Singapore (MPA) also told AFP the claim was untrue.

In an email dated May 28, 2020 the MPA said: “A video clip of a capsized ship said to be near Tuas is circulating. This is an old video footage from 2018. The incident did not happen in Singapore waters.”

A keyword search on Facebook found this statement about the incident. It was published on the MMEA’s Facebook page on December 26, 2018.

Part of the Malay statement translates to English as: “KOTA TINGGI, December 25 - The Malaysian Maritime Enforcement Agency, Maritime Rescue Sub Center (MRSC JOHOR) has activated a search and rescue (SAR) operation as soon as it received reports of MV Amanda overturning and eventually sinking at the position of about 3.3 nautical miles east of Tanjung Sepang, Kota Tinggi at 2pm.

“The reported number of crew on MV Amanda is as follows: a. Total: 9 people / Safe: 6 people / Still missing: 3 people”.

The MMEA released this follow-up statement on its Facebook page on December 28, 2018, announcing the end of a search and rescue operation for three people who were missing following the accident.

The incident was also reported by the Malaysian TV channel Buletin TV3 on December 25, 2018.