A video of football fans at a stadium spelling out a message in Arabic honouring the Prophet Muhammad has been viewed thousands of times in multiple Facebook posts which claim it shows a match in Germany’s domestic league. The video is being shared in a misleading context; it shows Saudi football fans honouring Prophet Muhammad at a match between two Saudi football clubs in the Saudi Professional League.

The text on the right hand side of the video states: “Germany’s premier football team Borussia Dortmund honors Prophet.” 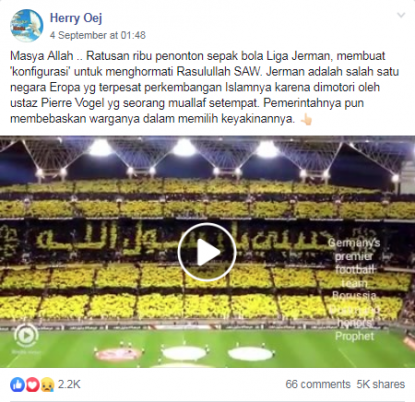 The post's Indonesian-language caption translates to English as: “Mashallah, hundreds of thousands of spectators of the German League, forming a ‘configuration’ to honor Prophet Muhammad PBUH. German is one of European countries which has the fastest development of Islam because of local convert Ustaz Pierre Vogel. Its government also lets citizens choose their beliefs.”

Borussia Dortmund is a football club based in the German city of Dortmund.

“Mashallah” is an Arabic phrase which means this is what God wills. It is also used to express praise.

“PBUH” means peace be upon him.

“Ustaz” is a title given to a Muslim preacher. Pierre Vogel is a former German boxer and convert to Islam. He is described as “Germany's most influential Salafist preacher”, in this article published by Britain's Daily Telegraph newspaper.

The video is being shared in a misleading context; it actually shows football fans at a Saudi Professional League match in Jeddah, Saudi Arabia.

AFP found this 57-second high-definition video published on the official YouTube channel for an Arabic language media site on February 21, 2015. It shows the same scene as the first 57 seconds of the video in the misleading posts. The video is embedded below.

The caption states: “Al Ittihad fans raise ‘Dear Prophet Messenger of God’ message during a match in the Saudi league.”

Below is a screenshot comparison between the video in the misleading posts (L) and the 2015 YouTube video (R):

An Arabic-speaking AFP journalist analysed the footage. The Arabic letters formed by the spectators translate to English as: “Dear Prophet Messenger of God.”

The match, as well as the display of the Arabic message, was reported in Arabic-language media, including here, here and here.

Images of the King Abdullah Sports City stadium correspond with the stadium in the video in the misleading posts.

Below is a screenshot comparison of the high-quality YouTube video of the crowd spelling out the Arabic phrase (top) and a photo from the stadiumguide specialist website (bottom). 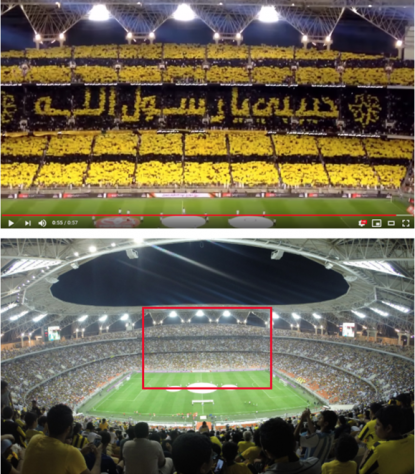 The area shown in the video has been outlined in red by AFP on the photo at the bottom. Note in particular the triangle forms in the roof of the stadium. The lights are also configured in the same pattern.