A video has been viewed thousands of times on Twitter and YouTube alongside a claim that it shows Malaysian nationals storming a customs office in the Malaysian state of Johor after Singapore closed its borders in an effort to curb the growing COVID-19 pandemic. The claim is false; Malaysian immigration authorities said the video was taken during an annual safety drill in December 2019; the video corresponded with photos of the drill published in December 2019 by police and local officials.

The one-minute two-second video was published here on YouTube on April 9, 2020. 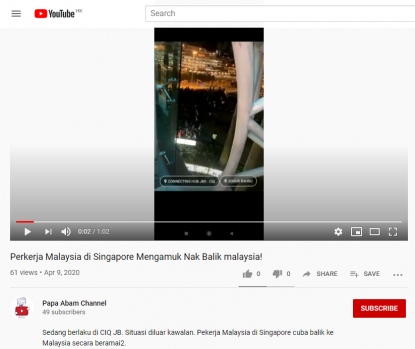 The video’s Malay-language title translates to English as: "Malaysian Workers in Singapore Rage To Return to malaysia!”

The video description translates to English as: “Happening at CIQ JB. The situation is out of control. Malaysian workers in Singapore are trying to return to Malaysia in droves.”

“CIQ JB” refers to a customs, immigration and quarantine (CIQ) office in the Malaysian city of Johor Bahru, which is often abbreviated as JB. The office is known as the Sultan Iskandar Building and is also a port of entry along the Malaysia-Singapore border.

On April 7, 2020, Singapore imposed a month-long lockdown, dubbed a “circuit breaker”, in a bid to curb the spread of COVID-19.

Weeks earlier on March 17, 2020, Malaysia issued its own “Movement Control Order” banning citizens from travelling abroad. The move was expected to affect at least 300,000 Malaysian nationals who cross into Singapore daily and make up a substantial part of the city-state's workforce.

The video was also viewed more than 2,500 times after it was shared here on Twitter, and here and here on YouTube alongside a similar claim.

The claim is false. On April 10, 2020, Malaysia’s Immigration Department shared the video alongside this statement on Facebook refuting the claim.

The statement reads: “Immigration Officials Deny Viral Video Linking to The Storming of Malaysians in Johor. Following the viral video, the purported incident of stampeding Malaysians that happened in the Sultan Iskandar Building (BSI) is not true. In a media statement, the Immigration Department of Malaysia (JIM) explained that the video was the atmosphere during a fire drill at BSI that was held on December 18, 2019.

“JIM seriously views the act of spreading the video done by irresponsible parties that intend to create anxiety among the society."

The Immigration Department also issued another statement on Facebook here on April 10, 2020, along with photos that it said showed “the situation during late night at April 9, 2020,” at the Sultan Iskandar Building.

AFP conducted a series of keyword searches on the Malaysian Immigration Department’s social media channels and found this Instagram post published on December 19, 2019, about an “evacuation exercise” at the Sultan Iskandar Building.

It reads, in part: “The evacuation exercise program is an annual activity conducted to make sure relevant government agencies are always in a state of preparedness to face any possibilities.”

A further keyword search on Facebook found photo albums on the accounts of the Immigration Office’s corporate communications team here and South Johor Bahru Police here, including photos of the safety drill, both dated December 19, 2019.

Singapore’s Immigration and Checkpoint Authority also issued this advisory on its Facebook page on December 17, 2019 about the planned safety drill, advising travellers to use an alternative port of entry for the duration of the exercise.