This video shows a protest in New York City in 2017

A video has been viewed thousands of times on Facebook alongside a claim it shows Muslims in the US praying on a street during the coronavirus pandemic. The claim is false; the footage has circulated online since February 2017; it corresponds with other footage in reports about a February 2017 protest in New York City against President Donald Trump’s Muslim travel ban.

The Indonesian-language post translates to English as: “#America Maghrib Prayer

“A country that is not Muslim majority, when Coronavirus hits… They flocked to Perform prayer in congregation on the street...” 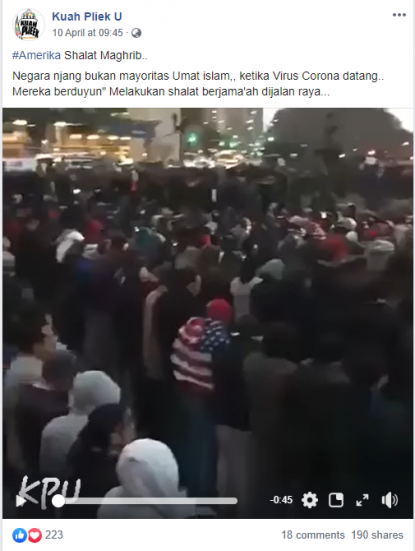 Maghrib prayer is performed by Muslims soon after sunset.

As of April 16, 2020, the novel coronavirus disease, or COVID-19, has killed at least 26,000 people in the US and infected more than 632,000 others, according to this data from US Centers for Disease Control and Prevention (CDC).

The Indonesian government said on April 16, 2020, that its COVID-19 death toll has reached 496 and the number of confirmed cases has surpassed 5,500. As a response to the high surge of cases, authorities have moved to restrict public gatherings, including religious congregations like Friday prayers.

The footage has been viewed nearly 3,000 times after it was shared in other Facebook posts here, here, here and here alongside a similar claim.

The claim is false. The footage has circulated online since February 2017; it corresponds with other footage in reports about a February 2017 protest in New York City against President Donald Trump’s Muslim travel ban.

Below is a screenshot comparison between footage in the misleading post (L) and the YouTube video (R):

The first two paragraphs of the report read: “As the sun set Thursday evening, hundreds of Yemeni bodega owners lined up for prayers outside Brooklyn Borough Hall. An imam’s chants of ‘Allahu Akbar’ filled the air, and the storekeepers alternated between standing and kneeling onto the cold concrete. There was a lot to pray for.

“President Donald Trump’s ban on immigrants from Yemen and six other Muslim-majority countries has affected some of these bodega owners personally. Some have family members stranded overseas, the U.S. visas they worked so hard to obtain rendered useless.”

The HuffPost journalist who reported the rally, Christopher Mathias, also tweeted a 16-second footage of the rally on February 2, 2017, which depicts similar scenes and same locations seen in the misleading clip.

One of the most powerful demonstrations I've ever seen #bodegastrike pic.twitter.com/NM95aN3irG

On January 27, 2017, Trump signed an executive order banning citizens of seven Muslim-majority countries from traveling to the US; the seven countries are: Yemen, Syria, Iran, Iraq, Sudan, Somalia and Libya.

The rally was also reported on February 2, 2017, by Qatar-based media organisation Al Jazeera and British newspaper The Guardian.

The location of the mass prayer in the YouTube video matches Google Street View images seen around the Brooklyn Borough Hall.

Below are screenshot comparisons between the scenes in the YouTube video (L) and Google Street View (R), with corresponding features circled in red: