A video has been viewed tens of thousands of times in multiple Facebook and Twitter posts which claim it shows a large funeral procession in Gujarat for an Indian politician who died after contracting Covid-19. The claim is false; the video actually shows a procession for an Indian politician in the Indian state of Maharashtra after he was shot dead in November 2020. 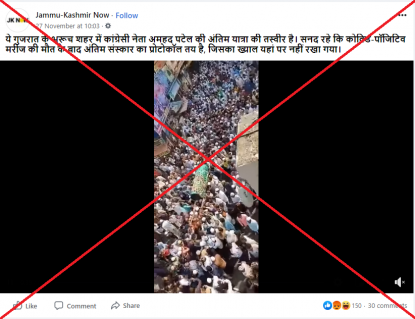 The post’s Hindi-language caption translates to English as: “This video shows the funeral procession of Congress leader Ahmad Patel in Gujarat's Bharuch city. It should be noted that there is a protocol in place for the last rites of a person who died of COVID-19, but that guidelines are not being followed here.”

Ahmed Patel, a top Indian National Congress (INC) party politician died on November 25, 2020 after being diagnosed with Covid-19. He was 71.

Patel’s funeral was held at his birthplace, Piraman, in Gujarat's Bharuch district, on November 26, 2020.

The video was also shared here, here, here and here on Facebook, alongside a similar claim.

A keyword search found this video published on YouTube on November 25, 2020 by Indian media organisation Hindustani Reporter, which appears to show the same casket seen in the misleading posts.

Jamil Shaikh was a politician of the Maharashtra Navnirman Sena (MNS) party.

Below is a screenshot comparison between the coffin seen in the misleading posts (L) and the coffin in the Hindustani Reporter YouTube video (R): 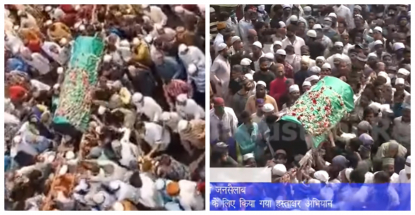 According to this report by local newspaper Mumbai Mirror, Shaikh, who served as the president of a civic ward in Maharashtra’s Thane city, was shot dead by unidentified assailants on November 23, 2020.

The coffin seen in the Twitter video does not match the coffin that can be seen in the video in the misleading posts.

Below is a screenshot comparison between the coffin seen in the misleading post (L) and the coffin in the INC’s video (R): 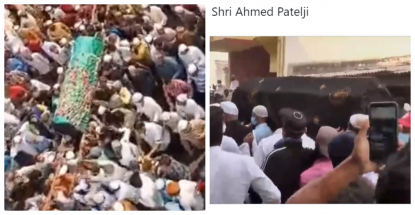 Patel’s funeral was reported by several Indian media channels, including The Hindu here, the Ahmedabad Mirror here and Gujarat Tak here. None of the photos and videos published in these reports show coffins that appear similar to that in the misleading post.