Skip to main content
Students hold up a rainbow flag in support of the LGBTQ movement during a Bad Student protest outside the Ministry of Education in Bangkok on December 1, 2020. (AFP / Mladen Antonov)

As Thai high school students staged a protest against school uniforms in Bangkok in December 2020, several photos circulated in Facebook posts which purported to show a US honours student who made comments in support of school dress codes. The claim is false; the photos show a Spanish adult movie star who has frequently appeared in memes online.

A collage of three photos was posted here on Facebook on December 2, 2020. 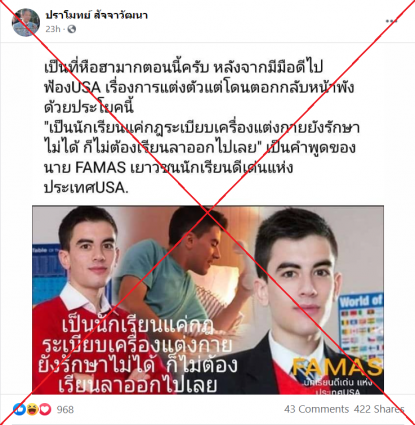 The text above the image translates to English as: “This is such a buzz right now, after tattle tailing to the USA about dress codes, but they received this reply ‘if a student can’t even comply to the dress code rules then don’t bother studying just quit’ which are the words of FAMAS an honor student from USA.”

The white text superimposed on the image below on the left reads: “if a student can’t even comply with the dress code then don’t even bother studying just quit”.

The text on the bottom right reads: “FAMAS outstanding student of the USA.”

The post is referencing a protest by Thai students against school uniforms on December 1, 2020.

Thai high school students dressed in casual clothes at a school in Bangkok to protest against Thailand’s school uniform regulations on December 1, 2020, according to this report by Bangkok Post.

The same photo was shared alongside a similar claim here, here and here.

The claim is false: the photos show a Spanish adult film actor.

The man pictured is Angel Munoz Garcia, known by his stage name Jordi.

Memes featuring photos of him have circulated as posts trolling social network users, according to this article by Chilean online newspaper La Tercera.

The same photo of Angel was used in a Twitter post here on May 15, 2018 alongside a false claim he is a student who is about to “graduate from Harvard with honors.”

The captions translate to English as: “In case you don't know him, this young man is called Miguel Antonio Mejia born in Tucuman, he is about to leave with Honors from Harvard University, and he is one of the creators of the H1N1 fever vaccine.
(Argentine Pride)” 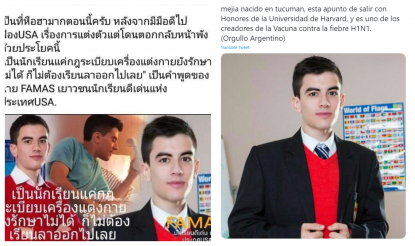