A video has been viewed tens of thousands of times in multiple Facebook and Twitter posts which claim it shows the secretary of Pope Francis holding a “blessing ceremony” for US President Trump at the White House during the COVID-19 pandemic. This claim is false; the video was first published online in September 2017 and shows Trump at the White House with Robert Jeffress, the pastor of the First Baptist Dallas Church and a member of the president’s evangelical advisory board.

The video was published here on Facebook on April 13, 2020. It has since been viewed more than 400 times.

The 15-second clip shows a group of people surrounding Trump at his desk in the Oval Office.

A voiceover can be heard throughout the video. It narrates a well-known incantation in an Arabic dialect native to Morocco, as identified by AFP. 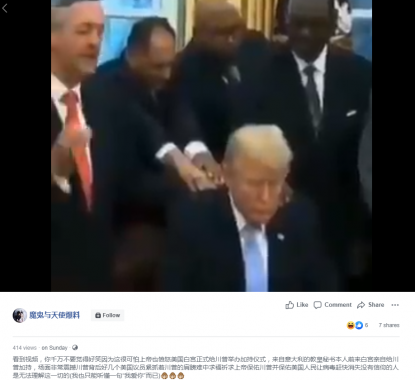 The post's caption, written in both simplified and traditional Chinese characters, translates to English as: “The White House in the United States officially held a blessing ceremony for Trump. The secretary of Pope Francis from Italy came to the White House to bless Trump in person. The scene was very stunning. Several US lawmakers behind Trump clung to Trump’s shoulders and prayed for God’s blessing to Trump and to the American people, hoping the virus would disappear quickly. People without faith will not understand all this (Even I can only understand the phrase ‘I love you’)”.

More than 25,400 people have died in the US after being infected with COVID-19 as of April 15, 2020, according to a tally by Johns Hopkins University. Here is an AFP report about the pandemic.

It was also shared among Arabic Facebook users here alongside a claim that Trump “brought wizards to protect him from the coronavirus”.

A reverse image search using keyframes extracted from the video in the misleading post found a longer version of the video published here on the YouTube account for US television network EWTN on September 1, 2017.

The video description states: “Trump Declares Day of Prayer-ENN 2017-09-01”. Its caption reads: “Joined by evangelical religious leaders, the President gives remarks in the Oval Office and signs a proclamation declaring this Sunday a Day of Prayer for victims of Hurricane Harvey. Mark Irons has details in his report from the White House.”

Robert Jeffress is a pastor at the First Baptist Dallas Church in Texas, and also a member of the president’s evangelical advisory board.

Below is a screenshot of the YouTube video at its one-minute 15-second mark: 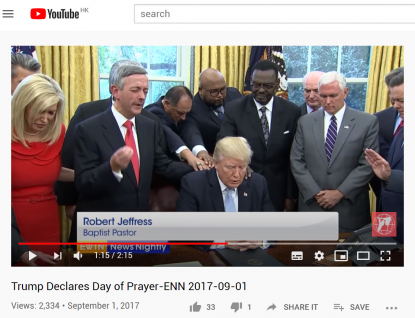 A national day of prayer was also mentioned in this September 2, 2017 tweet by Robert Jeffress, published alongside a similar image of the president and the pastor at the White House.

Honored to lead prayer as @POTUS declares Sunday a Day of Prayer for #Harvey victims. Grateful for @POTUS who believes in power of prayer. pic.twitter.com/jVj40QuX5r

Trump’s declaration of a day of prayer was also mentioned in this White House statement, and reported by US news website The Hill here and US newspaper The Washington Post here.