This video shows a prank staged in New York City

A video viewed hundreds of thousands of times across Facebook, Twitter and YouTube purports to show a funeral director throwing a dead body out of a hearse upon receiving a bad cheque. The claim is false; the dispute is in fact part of a prank that was staged in New York City. 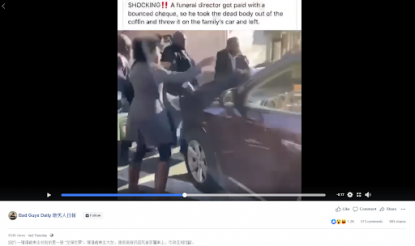 The 32-second video shows a street row, during which people can be heard arguing and screaming in English.

At the seven-second mark, a man in a newsboy cap throws what appears to be a dead body out of a vehicle and hurls it onto another one.

The post’s traditional Chinese-language caption translates to English as: “New York / A funeral director received a ‘bad cheque’. He was furious and hurled the dead body onto the family’s car, which caused a fight between the two parties. #DoNotIssueBadCheque”.

A similar description in English can be seen in a white box at the top of the video.

In fact, the video shows a staged prank.

A reverse image search based on a screenshot extracted from the video in the misleading post found a longer version uploaded here on YouTube on February 4, 2020. The post is titled “Dead Body Funeral Prank (Gone Wrong!)".

The caption of the YouTube video states: “The dead body of a family member's nephew was thrown out of a hearse because the driver didn't get the payment on the day of the funeral. Prank gone wrong!”

Below is a screenshot comparison between the footage in the misleading post (L) and the YouTube video (R):

The longer video explains how the prank is staged and shows the performance from multiple angles. At the 55-second mark, a man with long hair told the camera he would play the “dead guy”.

The video was filmed near 2 Dean Street, New York, according to Google Street View.