A video has been viewed hundreds of thousands of times in multiple posts on Facebook, Instagram, Twitter and YouTube alongside a claim it shows Muslims being shot in India. The claim is false; the footage shows a police drill in the Indian state of Jharkand in 2017.

Translated from Indonesian-language to English, the caption reads: “*INDIAN MUSLIMS SHOT ON THE SPOT* This news was spread in WhatsApp Group, allegedly about the Indian government’s crime against Indian Muslims… 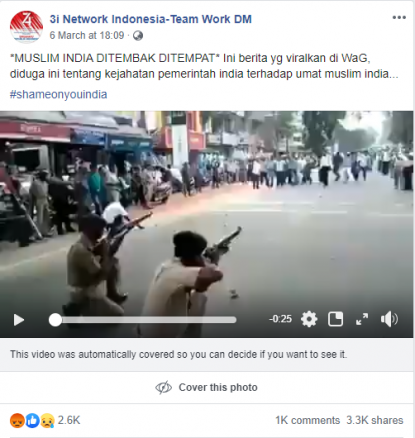 At least 50 people have been killed after sectarian violence broke out in the Indian capital of Delhi between February 24 and February 25 this year. The clashes were triggered by the amendment of India’s citizenship law, which critics claim discriminates against Muslims, AFP reported here.

The claim is false; the clip previously circulated online about a police drill in Khunti, a town in the eastern Indian state of Jharkhand, in 2017.

Khunti is a town in the Indian state of Jharkhand.

At the end of the video a police officer can be heard making an announcement in Hindi which translates to English as: “This was just a demo to show that the Khunti police is prepared to act against any untoward situation”.

A two-minute, 35-second clip of the event taken from a different angle was uploaded here on YouTube on November 3, 2017, titled: “Jharkhand police KHUNTI (part of traning) REHEARSAL”.

The clip’s caption reads: “In khunti rehearsal for police how we all police take charging and controlling on crowds at towns and other places. ( it's only and only rehearsal)”.

Local freelance journalist Anand Dutta told AFP that the drill was conducted near the main square of Khunti town around the same time as celebrations for the Hindu festival of Diwali in 2017.

"The location seen in the video is near the main square of Khunti town," he told AFP by WhatsApp.

Dutta also sent photos of the street where the drill was conducted via WhatsApp. Below is a collage of photos sent by the journalist (L) and screenshots taken from the video posted in the misleading Facebook post (R), with similar elements highlighted in green: 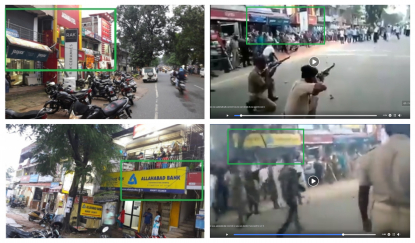 A red shopfront of Jagdamba Steel which can be seen at the four-second mark of the misleading video can also be seen here in a Google user image tagged at the location on Google Maps.

Below is the screenshot of the shopfront in Google: 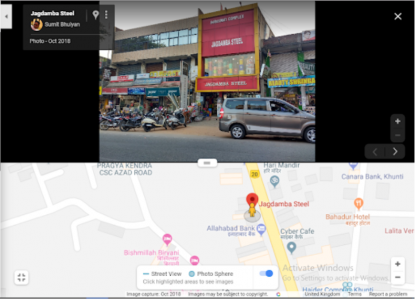 Below is a screenshot comparison between a scene in the first YouTube video (L) and the Google user image (R) with corresponding features circled in red by AFP: