A video has been viewed thousands of times in multiple posts on Facebook in April 2020 alongside a claim it shows police in India detaining people in a van carrying a COVID-19 patient after they failed to wear face masks outside. The claim is misleading; a spokesperson for India’s Tiruppur Police told AFP the video was staged for a police drill during the coronavirus pandemic; the video has previously circulated in media reports about a police drill in Tiruppur district.

The two-minute 18-second video shows police forcefully detaining people before putting them into a vehicle which is carrying a person on a stretcher. 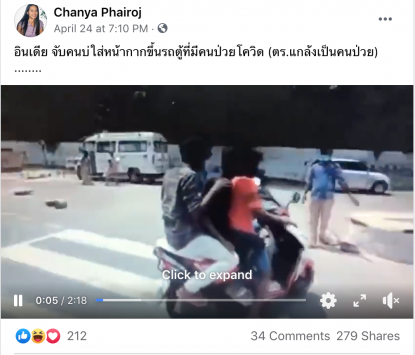 The post’s Thai caption translates to English as: “In India, people who don’t wear masks are put into a van that has COVID-19 patient (Police were pretended to be a patient).”

As of May 5, 2020, India reported more than 1,500 deaths and almost 33,000 cases of COVID-19, according to Indian Ministry of Health figures. In an effort to curb the spread of COVID-19, the country has also been in a state of nationwide lockdown since Prime Minister Narendra Modi’s announcement on March 25, 2020.

Comments from some Facebook users on the misleading post indicated they believed the video shows a real police incident.

One person wrote: "This is good, they deserved it".

Another said: "I want Thailand to do something similar to this It's so satisfying!!! LOL."

And one Facebook user wrote: "They knew it was dangerous but they didn't realise. There are people like this everywhere in the world."

Below is a screenshot of the some of the comments with names redacted by AFP: 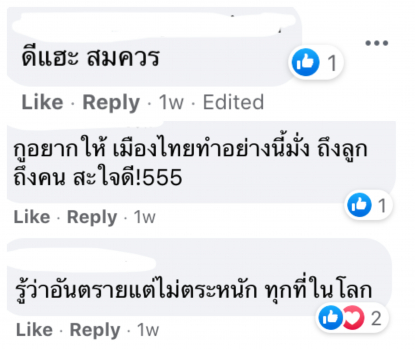 The video was also shared here, here, here and here on Facebook, alongside a similar claim.

A reverse image search on Google followed by a keyword search found an identical video published here on the YouTube channel for Indian newspaper Hindustan Times on April 24, 2020.

The video caption states: “Tamil Nadu’s Tiruppur police department releases awareness video for lockdown violators. In the promotional video, police can be seen putting lockdown violators with fake Covid-19 patients. This was an enactment video where even the violators were performers. People have been violating lockdown norms amid the coronavirus threat. India is under a nationwide lockdown till May 3 in view of Covid-19.”

Tiruppur is a district in southern India’s Tamil Nadu state.

Below is a screenshot comparison of keyframes in the video in the misleading post (L) and the Hindustan Times video (R): 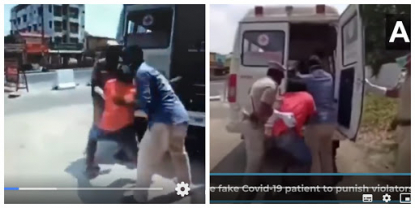 During a phone conversation on April 27, 2020, Tiruppur Police’s senior officer Jeyachandran said: "There is no truth that anyone was made to sit with COVID-19 patient. The person in the ambulance was not COVID-19 positive and this whole mock exercise was done only to create awareness that people should sit at home and follow the lockdown rules."