A video has been viewed tens of thousands of times on Facebook, Twitter and YouTube alongside claims that the footage shows a parade in France that was organised to celebrate China’s efforts to combat the deadly novel coronavirus. The claim is false; the video was in fact filmed in Italy during an annual art carnival in February 2020.

The three-minute and 29-second long video shows a group of Caucasian people marching in revolutionary-era uniforms of the Chinese People's Liberation Army. Behind the procession is a large float that has “China” written on it in simplified Chinese characters. Pro-Chinese Communist Party song "No Communist Party, no new China" can be heard from the 30-second mark of the video.

The post’s traditional Chinese-language caption translates to English as: “A parade in front of the Arc de Triomphe in France. A group of French people, donning the outfit of the Chinese People's Liberation Army, marched in celebration of China's victory against the epidemic to the song ‘No Communist Party, no new China’!!! 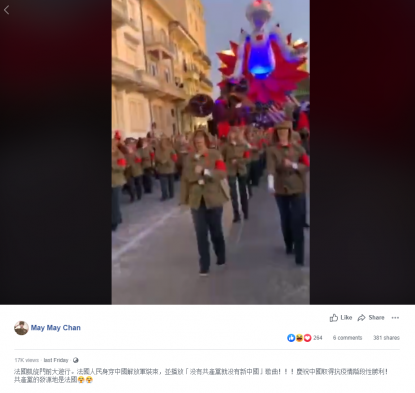 The video was shared with a similar caption on Facebook here, here and here; on Twitter here; and on YouTube here. It was also posted on Facebook here with a caption saying the parade-goers are Americans.

The claim is false; the parade actually took place in Italy during an annual carnival in February 2020.

A reverse image search on Google using video keyframes led to this Twitter post with a clip that corresponds with the video in the misleading posts from the beginning to the two-minute and 20-second mark. The post’s simplified Chinese-language caption translates to English as: “It is said that this took place in Italy.

“What are these Italians doing dressed as Red Guards?”

"Red Guards" were formed by young students in the 1960s in support of Mao Zedong, then-chairman of the Chinese Communist Party, and the Cultural Revolution.

Below are screenshot comparisons of the video in the misleading posts (L) and the Twitter video (R), both at the one-second mark and the two-minute and 19-second mark: 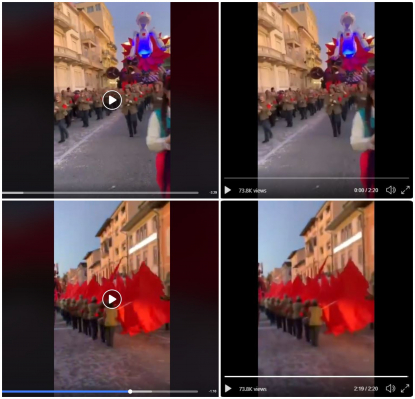 A subsequent keyword search then found this news article published by Italian newspaper La Nazione on February 9, 2020, about a parade held in the Italian city of Viareggio.

“Carnival of Viareggio, the second parade: show between masks, floats and music,” the Italian headline reads in English.

The report includes several photos from the same procession featured in the misleading posts.

Below are screenshots of the La Nazione images, which are credited to "Umicini" and captioned “The second Carnival parade”:

Screenshots of the pictures

A photo of the float with "China" written on it in simplified Chinese was also posted on the carnival’s official website here.

Below is a screenshot of the photo on the organiser's website: 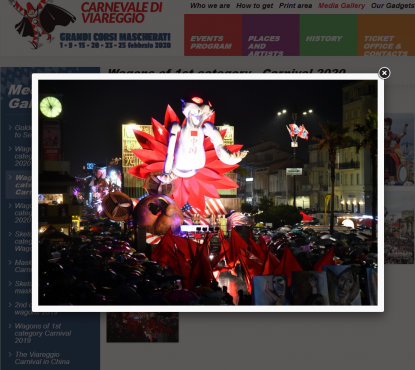 According to the carnival's website, the “Carnival of Viareggio has been for 147 years the most spectacular Italian event, testimony of the artistic and organizational ability of the Italians in the world.”

It further states here: "The Carnival of Viareggio fills a whole month of daytime and nighttime festivities with parades of allegorical floats, local parties, masked balls and festivals of all kinds."

China-themed floats were featured at the Carnival of Viareggio in the past, such as one of a red dragon and traditional Chinese masks seen in this Reuters photo in January 2010.

This article about the 2019 parade, published by Lyon-based television news network Euronews on February 10, 2019, states that the parade typically includes "satirical floats".

The article states in part: "Thousands of people lined the streets of Viareggio on Saturday to watch a parade of satirical floats in the Italian city's annual carnival.

"Renowned for its tongue-in-cheek take on contemporary issues, this year's parade focused primarily on world politicians and environment themes. One float depicted US President Donald Trump as an emperor with Twitter symbols adorning the hilt of his sword."