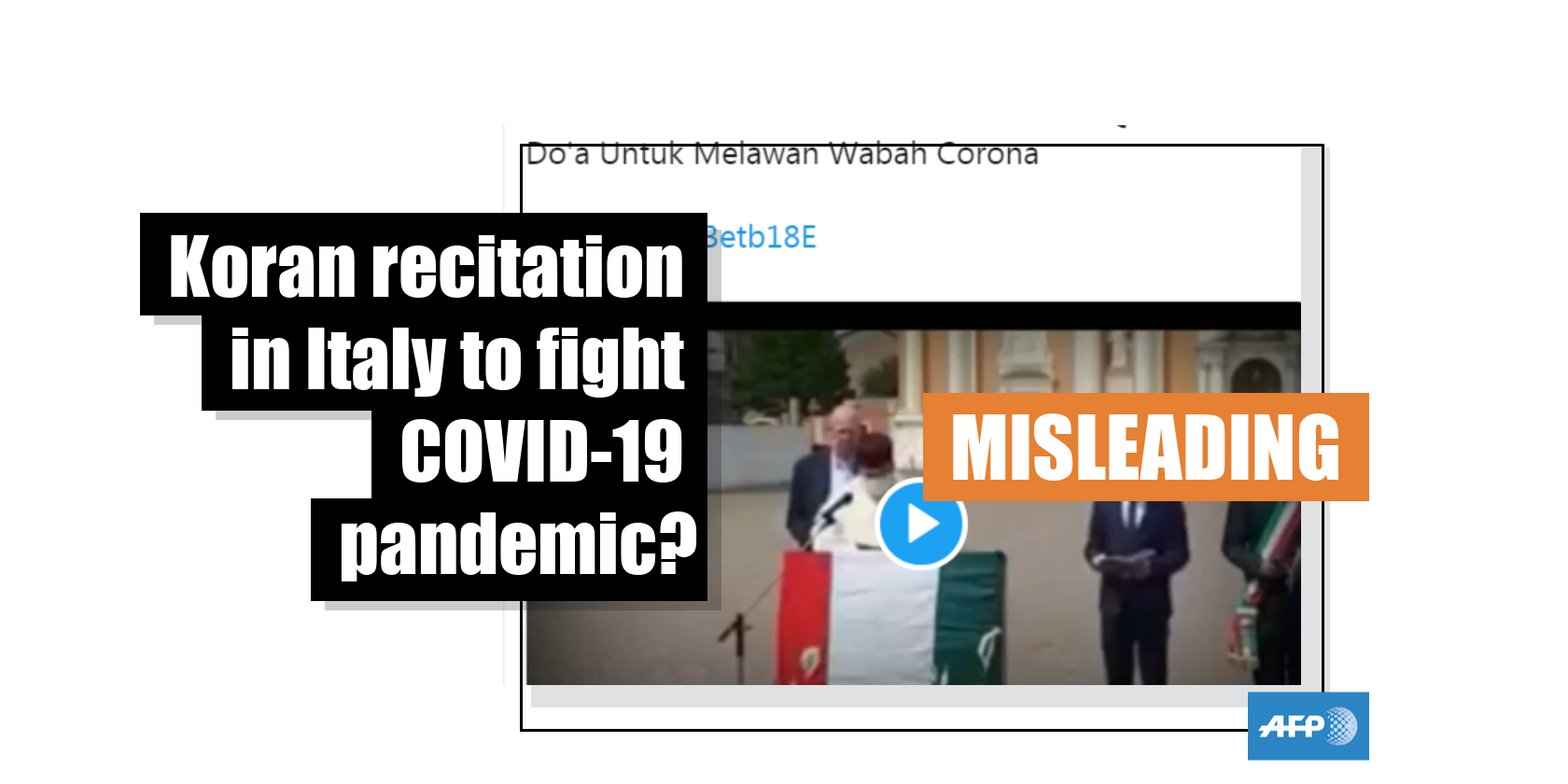 A video has been viewed tens of thousands of times on Twitter, Facebook and YouTube alongside a claim it shows a Koran recitation in Italy as part of the government’s effort to fight the novel coronavirus pandemic. The claim is misleading; the  footage shows an interreligious gathering held by the Diocese of Carpi in northern Italy to remember COVID-19 victims.

The two-minute, 20-second clip shows a man reciting the Koran at a podium covered in an Italian flag. The post’s Indonesian-language caption translates to English as: “The government of Italy asked for a Koran recitation and prayer to fight the coronavirus pandemic”.

As of April 30, 2020, the COVID-19 death toll in Italy has surpassed 27,000, while more than 203,000 people in the country have been infected with the disease, according to the World Health Organization (WHO) tally here.

The same video has been viewed more than 11,000 times after it was posted with a similar claim on Facebook here, here and here; and on YouTube here and here.

The claim is misleading; the video shows an interreligious gathering organised by the Diocese of Carpi in northern Italy to remember COVID-19 victims.

A reverse image search and a subsequent keyword search found a longer version of the video published here on April 13, 2020, on the YouTube channel of the Diocese of Carpi.

The Diocese of Carpi is located in Carpi, a city in the northern Italian province of Modena, as seen here on Google Street View.

The part shown in the misleading video starts at the 23-minute, 30-second mark of the Diocese of Carpi video.

The Italian-language title of the 32-minute, 57-second video translates to English as: “Interfaith meeting organised on April 13, 2020”.

The first two paragraphs of the caption read: “Interfaith and multicultural meeting in memory of the victims Covid-19 was broadcast on Monday, April 13, at 12, in Piazza Martiri on the TRC and TvQui stations.

“The initiative, organised by the Diocese of Carpi and the municipal administration, was a moment of prayer in memory of all the deceased from Covid-19. The following were present: Mayor Alberto Bellelli for the municipal administration; Vicar General Monsignor Ermenegildo Manicardi for the Diocese; Rabbi Beniamino Goldstein for the Jewish Community of Modena and Reggio; Imam Mourad Selmi for the Association of Muslim Communities; Florin Chihaia for the Orthodox Church of Romania; Arcadie Porcescu for the Moldavan Orthodox Church of San Spiridione di Trimithonte; Elisa Yang, for Chinese evangelical Christians; and Manroob Sing for the Sikh community.”

The footage in the misleading post has been flipped to show a mirrored version of the original video.

Below is a screenshot of the video in the misleading post (L), its mirrored version (C) and the genuine YouTube video (R):

Comparison of the clip in the misleading post (L), its mirror version (C) and the original YouTube video (R)

The Carpi municipal government also posted a video of the event on its Facebook page here on April 13, 2020.

Modena-based broadcaster TvQui reported on the interreligious gathering here on April 13, 2020, saying it ended with “a common prayer of hope, as a wish for the end of this difficult moment”.